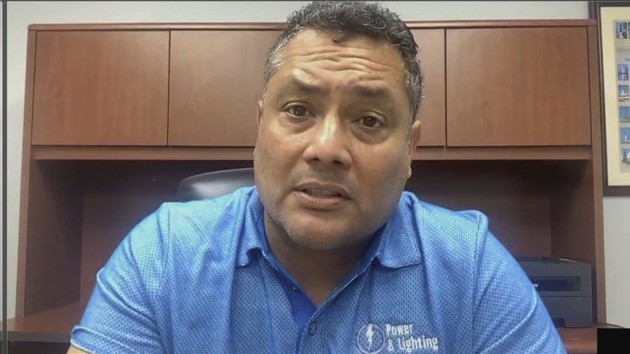 Benny Diaz, of Miami, says the rental home across the street from his is being used for parties and they may be helping the coronavirus spread. - (ABC News)
Posted on July 14, 2020 by ABC News

(MIAMI) — Benny Diaz says that lately, the scene in front of his home in a residential Miami neighborhood has looked a lot like a normal day in South Beach several miles away, with partygoers at the rental home across the street showing off their expensive rental cars, blasting loud music, and getting drunk without regard for the risks of spreading the coronavirus.

Diaz says the parties have gotten bigger since they began in March, when the COVID-19 pandemic first led to bars and nightclubs closing in Florida.

Two weeks ago, there were buses shuttling people to and from a party, as well as over a dozen people arriving by cab, Diaz said. He estimated there were more than 100 people at the party.

“When they came out of that bus, there was nobody wearing a mask,” he said. “It was crazy.”

Over the weekend, 12 states reported record highs of new coronavirus cases, with many being traced back to large gatherings. Florida, specifically, recorded the highest single-day total of new cases out of any state since the pandemic began, with 15,000.

“These people that are in these party homes lately have no concern at all that they can catch the virus just by not wearing masks, not being socially distant,” Diaz said. “They are there to party on top of each other. … They probably think that they’re not going to catch the virus.”

“They’re negligent,” he added. “The fact that they think they can’t get it or that they don’t care. But it’s really shameful what they’re doing, not caring about somebody else.”

Several parties across the country have been linked to the spread of coronavirus cases.

On Sunday, Westfield, New Jersey, Mayor Shelley Brindle announced that an uptick in cases in the town had been linked to parties within the community.

In Alabama earlier this month, students who had been diagnosed with the virus were found to have attended “COVID parties,” where organizers purposely invited people who had the virus, Tuscaloosa City Councilor Sonya McKistry told ABC News.

In San Antonio over the weekend, a man died after attending one of these parties. He told his nurse he thought the virus was a hoax but realized he made a mistake when he got sick.

At least 6 Republican operatives, some tied to Trump camp, working to get Kanye West on the 2020 ballot
Denying federal aid to state, local governments could put neediest residents at risk
Coronavirus updates: State Department issues new travel rules
Doctors warn cancers are going undiagnosed amid COVID-19 pandemic. Here’s what you can do to decrease the risk.
As coronavirus spreads through nation’s jails and prisons, lawmakers demand more transparency on toll
Dems want expert panel to OK coronavirus vaccine before mass use