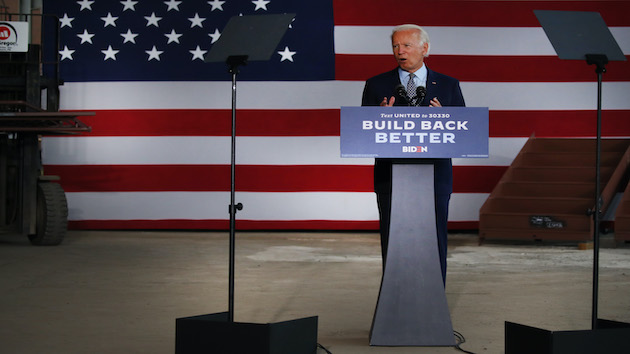 (WASHINGTON) — Former vice president Joe Biden unveiled a sweeping new proposal on Tuesday that called for the United States to achieve a carbon-free power sector by 2035 and make a $2 trillion investment over his first four years in office in green energy and infrastructure to combat the threat of climate change.

The campaign described the proposal, which would move the nation rapidly toward a quick reduction of its reliance on fossil fuels, as a jobs and infrastructure plan, building upon and incorporating his initial climate policy, by “scaling up and accelerating our investments to meet the moment we are in: an economic crisis,” according to one campaign adviser.

The new timeline and spending represent a significantly more aggressive approach on the issue for Biden, who faced calls during the Democratic primary from the progressive wing of the party to make the fight against climate change a more urgent priority.

In a fact sheet outlining the new plan, which is the second pillar of his “Build Back Better” economic proposal, Biden’s campaign asserted that if the steps the candidate is proposing are taken, they will put the United States on a “irreversible path to achieve net-zero emissions, economy-wide, by no later than 2050.”

“Biden has from the outset, rejected the idea that we have to choose between good jobs and a clean energy future. He laid out a vision on this last year for building a clean energy future, and today he’s putting in place some of the concrete plans to create these jobs. Again, these are good paying union jobs,” a Biden campaign adviser told reporters on a conference call outlining the plan Tuesday morning.

The more aggressive plan also comes roughly a week after a task force established by Biden and former primary rival Sen. Bernie Sanders recommended that the presumptive Democratic nominee move to “elimin[ate] carbon pollution from power plants by 2035 through technology-neutral standards for clean energy and energy efficiency,” a proposal that has now officially made its way into the former vice president’s platform.

However, a senior campaign adviser stressed Tuesday that the new plan did not solely rely on the recommendations from the task force and is instead the result of a year-long process to develop a plan that creates jobs and moves the nation toward a more sustainable energy sector, consulting with a combination of elected officials, policy experts, scientists and private sector businesses.

“I would…not peg this specifically to the task force recommendations, but a well over a year’s long effort to get this right,” the adviser said, slamming the Trump administration’s lack of focus on the issue of climate change.

“This week, we’re really taking on infrastructure, I mean this is something that [Trump] has tried to own and, frankly abjectly failed. You know the plan that we’re putting forward today will modernize America’s infrastructure from end to end, and make it sustainable for the future. So, this is an actual infrastructure week,” another adviser argued, taking aim at the Trump administration’s frequent celebrations of “infrastructure week.”

Along with the green economy plan, the campaign also released a plan specifically focused on environmental justice and combating the disproportional impacts of climate change on communities of color.

The campaign committed to targeting 40% of the benefits of its “clean energy revolution” to disadvantaged communities and will place a focus on addressing the connection between the impacts of climate change and public health, drawing on points from Biden’s plan to combat coronavirus and prepare for future global health threats.

The campaign will also focus on collecting data to inform decisions, creating a ‘Climate and Economic Justice Screening Tool ’ that will identify communities impacted by the effects of climate change and publish that information in annual maps identifying the communities.

As part of the plan, Biden’s campaign is committing to establish an Environmental and Climate Justice Division within the Department of Justice, and overhaul the EPA External Civil Rights Compliance Office, as part of a path to overhaul the government’s current environmental justice policy, which dates back to 1994.

Biden’s previously-released plan on climate change called for a “federal investment of $1.7 trillion over the next ten years, leveraging additional private sector and state and local investments to total to more than $5 trillion,” and aimed to achieve “a 100% clean energy economy and net-zero emissions no later than 2050.”

Biden’s initial $1.7 trillion price tag for the federal funds would be paid for by “reversing the excesses of the Trump tax cuts for corporations, reducing incentives for tax havens, evasion, and outsourcing, ensuring corporations pay their fair share, closing other loopholes in our tax code that reward work not wealth, and ending subsidies for fossil fuels,” according to the campaign.

The $2 trillion price tag over four years, the campaign argued, is “what the science demands to address the climate crisis,” but when asked specifically about how it intends to pay for the hefty price tag, the campaign declined to provide specifics, saying the full payment plan would be revealed when the full “Build Back Better” plan was announced in the coming weeks.

“It will be a combination of paid-for spending through tax increases on corporations back to the 28% rate and asking the wealthiest Americans to pay their fair share, and some amount of stimulus spending, and we’ll have more to say on what that looks like in the weeks ahead,” an adviser said.

Biden’s plan released Tuesday also calls for the creation of a “Civilian Climate Corps ” to develop scientific solutions to spur a more sustainable economy, an idea that was originally proposed by another one of the Democrat’s former primary rivals, Washington Gov. Jay Inslee.

Inslee, who made climate change the foundational issue of his presidential campaign, released a statement on Tuesday praising Biden’s new plan.

“The next president must lead a national mobilization to defeat climate change. Joe Biden’s plan shows that he’s serious about defeating climate change, and has a roadmap to become the Climate President that America needs,” Inslee, whose team provided input to Biden’s campaign to craft its energy policy, wrote.

Biden is expected to lay out his new green energy plan during remarks in his hometown of Wilmington, Delaware, Tuesday afternoon.

At a virtual fundraiser on Monday evening, Biden spoke specifically about the sense of urgency he plans to bring on the issue of combating climate change if he unseats Trump in November.

“2050 is a million years from now in most people. My plan is focused on taking action. Now,” Biden said. “God willing I win and even if I serve eight years, I want to make sure we put down such a marker that it’s impossible for the next president to turn it around.”