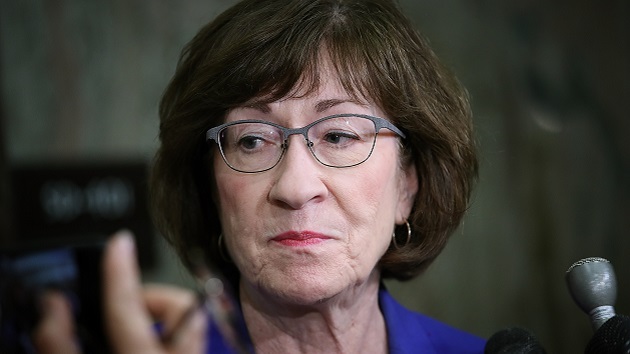 (WASHINGTON) — The senior Maine senator has represented the state in the upper chamber since 1997, and she’s pursuing a fifth term in a vastly different political environment, one where her disposition is increasingly out of step with elected leaders and voters, and her vote in favor of President Donald Trump’s second Supreme Court justice nominee continues to be weaponized against her.

“The big picture is that she’s in a fight for her electoral life here that she’s really never seen before since she was first elected to the seat,” said Mark Brewer, a professor of political science at the University of Maine.

New England used to be a stronghold for Republicans, but the party “was changing underneath Susan Collins’ feet before Donald Trump even became a possible reality as an elected official,” Brewer said. When Trump entered the political arena, and then won the presidency, that move to the right only accelerated.

“Today’s GOP… is Trump’s GOP – and she doesn’t fit in that party,” he told ABC News.

All three major race raters – Inside Politics, Cook Political Report and Sabato’s Crystal Ball – rate Collins’ race as a toss-up, meaning it’s basically anyone’s guess at this point whether she’ll be able to hold onto her seat, or lose to her Democratic challenger.

“This is an atmosphere like nobody has never seen in Maine before. Everything is so polarized. Everything you see happening in the country, you see in Maine,” the Collins campaign told ABC News. “You’ve got Democrats and Republicans at each other’s throats, and you have Senator Collins’ opponents flooding Maine with $20 million worth of false attack ads in an attempt to try to make this Senate race a referendum on Donald Trump. Senator Collins is going to run her own race, like she always does, on her own impressive legislative record.”

The state will hold its primary election on Tuesday, and the winner is widely expected to be Sara Gideon, the two-term speaker of Maine’s House of Representatives, who’s been a state lawmaker since 2014. Gideon must first beat two other candidates – attorney Bre Kidman and businesswoman Betsy Sweet – but during the primary, she’s basically been running a general election campaign, contrasting herself with the sitting senator rather than her primary competitors.

The DSCC, national Democrats’ Senate campaign arm, backed Gideon early, just one day after she announced she was running in June 2019. She’s out-fundraised Collins by millions of dollars. According to the most recent pre-primary Federal Election Commission filings, which cover the entirety of the campaign through June 24, Gideon raised nearly $22 million while Collins had raised about $15 million.

But the race is less about Gideon than it is about other prominent political figures.

“I’d say it’s about Donald Trump, and second would be Collins, and third would be (Justice Brett) Kavanaugh, and fourth would be Sara Gideon,” said Larry Sabato, the director of University of Virginia’s Center for Politics who serves as the editor-in-chief for Crystal Ball’s race ratings analysis.

But right now is not November, and as exhibited by everything that’s happened with a global pandemic and national reckoning over race in the last four months, a lot can change in a short amount of time.

Trump’s base of supporters aren’t Collins’ base of supporters, but that’s not necessarily her problem this election, said Brewer. Trump supporters will still back her because she’s supported the president on some big votes, like the Tax Cuts and Jobs Act in 2017 and to give then-Judge Brett Kavanaugh a seat on the nation’s highest court. Plus, she’s running unopposed.

But the voters Collins – and any Maine politician – really needs to win over are the ones who aren’t registered as Republicans or Democrats. According to the Maine secretary of state’s office, of the over 1 million active registered voters as of early March, nearly a third are unaffiliated.

For a lot of these moderate voters, especially among women, Collins – one of just a few pro-choice Republicans in Congress – voting to confirm Supreme Court Justice Brett Kavanaugh is a thorn in her reelection campaign’s side.

“The Kavanaugh vote clearly is one that has landed… he was not especially popular, and he certainly wasn’t in moderate to liberal states,” Sabato said. “That hasn’t faded, and it’s being used daily out there in one way or another, and will continue to be through November.”

“The Kavanaugh vote is the one thing that she just can’t get away from,” echoed Brewer, bringing up the Court’s recent ruling on an abortion case out of Louisiana.

On June 29, in a 5-4 decision, the Court ruled that a Louisiana law that essentially outlawed abortion by requiring abortion providers to have admitting privileges with a nearby hospital was unconstitutional. Kavanaugh sided with the minority dissenting, and wrote his own opinion.

“While a welcome victory, this decision does not undo years of systematic attacks on reproductive rights by the Trump administration and Republicans across the country. Senator Collins has consistently enabled those efforts by voting to confirm anti-choice nominees like Justice Kavanaugh,” Gideon said in a statement the day of the ruling.

In Collins’ nearly hour-long October 2018 speech on the Senate floor announcing she’d vote for Kavanaugh, whose nomination was marred by a decades-old allegation of sexual misconduct, Collins directly addressed the issue of abortion, and how she believed Kavanaugh would respect the precedent that a woman has a right to a safe and accessible abortion, which was established in the landmark 1973 Supreme Court case, Roe v. Wade, and held up more recently in Planned Parenthood vs. Casey, in 1992.

“Protecting this right is important to me,” Collins said. “(Kavanaugh) believes that precedent is not just a judicial policy, it is constitutionally dictated to pay attention and pay heed to rules of precedent. In other words, precedent isn’t a goal or an aspiration. It is a constitutional tenet that has to be followed except in the most extraordinary circumstances.”

The Louisiana case was not a case of the same caliber as Roe v. Wade, but any abortion case Kavanaugh votes on shores up that ghost of Collins’s recent past. The senator has maintained that she does not regret voting for Kavanaugh’s confirmation.

Fortunately for Collins, there won’t be any more opinions from the Supreme Court before the election.

But unfortunately for her, while the country may be living in daily uncertainty, Trump will be a constant presence throughout the rest of this campaign.

The coronavirus pandemic has been a full-circle moment for Collins. In her 1996 Senate campaign, she pushed a pro-small business platform and won. Small businesses are essential to her home state’s economy, and when the virus outbreak hit the United States, Collins co-authored the bipartisan Paycheck Protection Program (PPP), a forgivable loan program that incentivizes businesses to retain their employees and prevent layoffs.

While the initiative got off to a rocky start, it has ultimately been successful, even needing a financial refuel in May, and now having approved nearly 5 million loans, including to more than 27,000 Maine companies totaling $2.2 billion, according to an analysis of the loan data done by Maine Public Radio.

Meanwhile, back in Maine, the House of Representatives adjourned its session on March 17, and Gideon, her likely Democratic competitor, has not called lawmakers back to take up any coronavirus-related legislation. While the legislature is out of session, there still have been committee discussions, work sessions and public hearings.

Gideon had been critical of the loan program and Collins’ role in crafting it.

“While Maine’s small businesses struggle to stay afloat, the Paycheck Protection Program has allowed big corporations like Ruth’s Chris and the Los Angeles Lakers to step to the front of the line and secure millions of dollars in loans,” an early May campaign email from Gideon’s team read. “Meanwhile, many small businesses in Maine’s hard-hit restaurant and hospitality industry have been left behind by a program that doesn’t offer enough flexibility to be helpful to them.”

Maeve Coyle, a spokesperson for Gideon’s campaign, provided ABC News with this statement about the loan: “The firm where Sara’s husband works is one of more than 450 firms in Maine that received assistance from the program following the closure of courts in Maine. From when this crisis began, Sara has been clear that this is a time when Washington needs to put politics aside and do what’s best for workers and small businesses, not large corporations and the special interests. Unfortunately, as we’re still seeing today, that’s not what Mitch McConnell and Senate Republicans have done.”

Brewer, the University of Maine professor, told ABC News he thinks the pandemic has helped Collins.

“She’s been very active… she’s been out there, and people have seen her trying to get stuff done in Washington,” he said.

As for her competitor, Brewer said that Gideon, along with state Senate President Troy Jackson, has gotten “a lot of heat” in Maine for not calling back the legislature, and blasting a program her husband’s place of work benefited from was “a pretty big error that should have been easily avoided.”

But even with that potential win for Collins and loss for Gideon, Trump looms overhead.

Sabato told ABC News that the United States rebuilding a strong economy before November could make all the difference for Collins – because of how it impacts Trump’s prospects. In nearly every poll, the economy is Trump’s number one seller. Voters trust him more on that issue over any other than compared to Biden, and at the ballot box, the economy is often top of mind.

“If Trump can be competitive again and come as close as he did in 2016 to winning Maine, she will win Maine – even if Trump will lose narrowly,” said Sabato. “But Trump has a long way to go to get competitive again.”