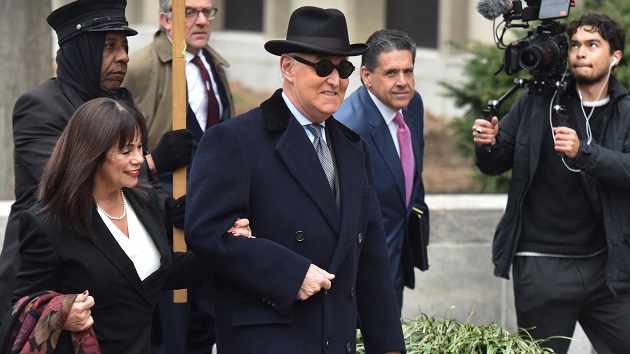 (WASHINGTON) — President Trump has commuted the sentence of his longtime friend and former campaign adviser Roger Stone, the White House announced on Friday.

In a statement, White House Press Secretary Kayleigh McEnany said Trump had “signed an Executive Grant of Clemency commuting the unjust sentence of Roger Stone, Jr.,” calling him “a victim of the Russia Hoax that the Left and its allies in the media perpetuated for years in an attempt to undermine the Trump Presidency.”

“In light of the egregious facts and circumstances surrounding his unfair prosecution, arrest, and trial, the President has determined to commute his sentence,” McEnany wrote. “Roger Stone has already suffered greatly. He was treated very unfairly, as were many others in this case. Roger Stone is now a free man!”

“Mr. Stone is incredibly honored that President Trump used his awesome and unique power under the Constitution of the United States for this act of mercy,” Smith told ABC News. “Mr. and Mrs. Stone appreciate all the consideration the President gave to this matter.”

House Intelligence Committee Chairman Adam Schiff, D-Calif., who oversees the committee Stone was convicted of lying to, condemned the move, accusing Trump of undermining the rule of law.

“With this commutation, Trump makes clear that there are two systems of justice in America: one for his criminal friends, and one for everyone else,” Schiff said in a statement. “Donald Trump, Bill Barr, and all those who enable them pose the gravest of threats to the rule of law.”

Stone came under scrutiny for activity related to former Special Counsel Robert Mueller’s investigation into Russian interference in the 2016 presidential election. In February, he was sentenced to 40 months in prison after he was found guilty in November of obstructing justice, witness tampering and five counts of lying to Congress. Stone is currently remanded to home confinement and was expected to report to prison on July 14.

While a commutation reduces a convict’s sentence either in part or in full, only a pardon nullifies a conviction entirely. Absent a full pardon, Stone will avoid prison time but will still remain a convicted felon, barring him from voting in any future elections, serving on a jury or seeking elected office. If Trump chooses, as a part of the commutation he also may release Stone from any of the financial obligations that his conviction carried.

Stone was convicted of misleading lawmakers on several key elements of their probe into Russian meddling, including communications he had with the Trump campaign discussing WikiLeaks’ dissemination of damaging documents stolen from Democrats during the campaign.

Stone formally left the Trump campaign in late 2015 but remained in touch with multiple senior advisers to Trump and the presidential candidate himself. According to testimony and evidence presented at his trial, Stone became the campaign’s informal point-person on all things WikiLeaks — a relationship that underpinned lies he eventually told during sworn testimony before the House Intelligence Committee in September 2017.

The commutation comes after Trump had long fueled speculation that he had plans to pardon or commute the sentence of his longtime friend and adviser.  President Trump tweeted in May that Stone “had been treated very unfairly” and made reference to a jury foreperson, who he has previously accused of being biased.

“Roger Stone has been treated very unfairly. How about that jury Forewoman, does anybody think that was fair? DISGRACEFUL! Stay tuned,” the president tweeted.

After a federal judge in Washington, D.C. last month gave Stone a surrender date of July 14 — though he had sought to report to the Georgia prison on Sept. 3, citing coronavirus fears — the very next day the president tweeted a story about a petition for him to pardon Stone.

Stone had asked for a new trial based on alleged juror misconduct, but Judge Amy Berman Jackson denied Stone’s request in April, saying Stone failed to “[supply] any reason to believe that there has been a ‘serious miscarriage of justice.'”

“The defendant has not shown that the juror lied; nor has he shown that the supposedly disqualifying evidence could not have been found through the exercise of due diligence at the time the jury was selected,” Jackson said.

With regard to Stone’s argument that the juror was biased because of comments made on social media, Jackson said, “To the extent one could consider any of the social media posts to be inconsistent with the juror’s questionnaire, they do not warrant a new trial because they do not meet the legal test for something that has been ‘newly discovered.'”

During the hearing on the new trial motion in late February, Jackson expressed concern for the safety of a juror from Stone’s trial after Trump repeatedly accused her of being biased.

“The president of the United States used his Twitter platform to disseminate a particular point of view about a juror,” Jackson said during that hearing. “Any attempt to invade the privacy of the jurors or to harass or intimidate them is completely antithetical to our system of justice. They deserve our protection. They deserve to have their privacy protected.”

Trump has so far granted 25 pardons and commuted the sentences of 10 individuals since taking office, among them a host of controversial figures championed by conservative media as well as several other political allies.    Trump first pardoned former Maricopa County Sheriff Joe Arpaio in August 2017, taking the unusual step of doing so after Arpaio’s trial and conviction but prior to his sentencing. Since then Trump has sporadically granted pardons to individuals like conservative filmmaker Dinesh D’Souza, Scooter Libby, former NYPD Police Commissioner Bernie Kerik and Conrad Black, a former newspaper publisher who penned a fawning biography of Trump in 2018.    This February, Trump commuted the sentence of former Illinois Gov. Rod Blagojevich, who was eight years into his 14-year prison sentence on federal corruption charges. Trump has also in several cases commuted the sentences of individuals convicted for non-violent drug offenses, following personal pleas from Kim Kardashian West. He also granted a posthumous pardon to the legendary boxer Jack Johnson.    Typically, modern presidents are known to use their pardon and commutation powers sparingly in their first terms — often through a meticulous process via close coordination between the White House and the Justice Department’s Office of the Pardon Attorney.    While President Obama set a record in commutations at 1,715 by his final day in office — roughly 98% of which were for prisoners convicted on drug offenses —  at the end of his first term he had only commuted the sentence of a single individual while granting pardons to 22 others. Obama granted a total of 212 pardons before leaving office, fewer than any of his modern predecessors with the exceptions of former presidents George H.W. Bush and George W. Bush.

The long goodbye: The stars of ‘Marvel’s Agents of S.H.I.E.L.D.’ on tonight’s series finale
Trump pushes for college football season, claiming young, healthy college athletes are ‘not going to have a problem’
Seattle police chief resigns in wake of ‘personal’ budget cuts to department
Downtown Chicago reopens for cleanup in wake of widespread looting
Coalition of major CEOs pledge to hire 100,000 Black, Latino, Asian workers in New York
‘Fresh Prince of Bel-Air’ being rebooted as a drama with Will Smith as exec producer