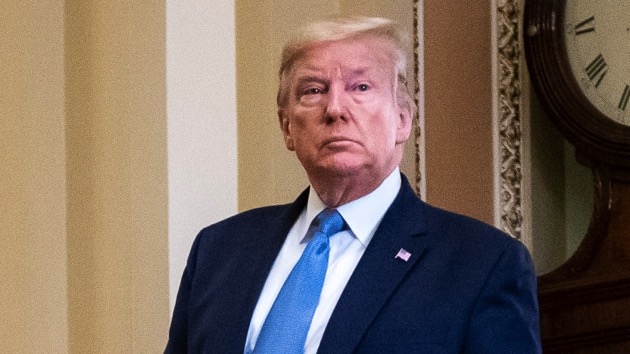 (WASHINGTON) — In a history-making decision on Thursday, the Supreme Court ruled President Donald Trump cannot claim “absolute immunity” from criminal investigation while in office and may need to comply with a New York grand jury subpoena seeking his personal financial records.

The decision is a major legal defeat for Trump, although it remains highly unlikely the public will see the president’s tax returns or financial records before Election Day. If the records are turned over in the grand jury probe, by law they must remain secret.

Chief Justice John Roberts, writing the 7-2 majority opinion, concluded that “no citizen, not even the President, is categorically above the common duty to produce evidence when called upon in a criminal proceeding.”

Manhattan District Attorney Cyrus Vance is seeking 10 years of tax returns for Trump and his businesses as part of a probe into possible state tax fraud.

“The President is neither absolutely immune from state criminal subpoenas seeking his private papers nor entitled to a heightened standard of need,” Roberts said.

But in a nod to the unique position of the presidency, Roberts returned the case to a lower court to allow Trump to “raise further arguments as appropriate,” such as claims about the subpoenas’ burden on his official duties.

“The court today unanimously concludes that a president does not possess absolute immunity from a state criminal subpoena, but also unanimously agrees that this case should be remanded to the district court, where the president may raise constitutional and legal objections to the subpoena as appropriate,” wrote Justices Brett Kavanaugh and Neil Gorsuch, the president’s two appointees to the high court, in a concurring opinion.

Given the further proceedings, it was not immediately clear how soon the New York grand jury could potentially receive the documents.

“This is a tremendous victory for our nation’s system of justice and its founding principle that no one – not even a president – is above the law,” Vance said in a statement. “Our investigation, which was delayed for almost a year by this lawsuit, will resume, guided as always by the grand jury’s solemn obligation to follow the law and the facts, wherever they may lead.”

“The court’s decision threatens to impair the functioning of the presidency and provides no real protection against the use of the subpoena power by the nation’s 2,300+ local prosecutors,” Alito wrote.

Trump tweeted shortly after the decision was revealed that the matter is a “political prosecution.”

The Supreme Court sends case back to Lower Court, arguments to continue. This is all a political prosecution. I won the Mueller Witch Hunt, and others, and now I have to keep fighting in a politically corrupt New York. Not fair to this Presidency or Administration!

Courts in the past have given “broad deference”. BUT NOT ME!

But the president’s attorneys said they were “pleased.”

“We are pleased that in the decisions issued today, the Supreme Court has temporarily blocked both Congress and New York prosecutors from obtaining the President’s tax records. We will now proceed to raise additional Constitutional and legal issues in the lower courts,” Counsel to the President Kay Sekulow said in a statement on the New York case and on a second case in which the court blocked four congressional subpoenas, also sending the matter back to a lower court.

When Trump’s personal accounting firm and three financial institutions used by him and his business were initially subpoenaed for the information, in both cases, Trump intervened to block the third parties from complying. He has lost at every level in lower federal courts.

Trump is the only modern American president to have not publicly released tax returns or divest from major business interests while in office.

“The Supreme Court today confirmed that the president is not above the law. The court ruled that President Trump must follow the law, like the rest of us. And that includes responding to subpoenas for his tax records,” said ACLU national legal director David Cole.

“There’s a lot of play left in these cases,” said Philip Hackney, an associate professor in the University of Pittsburgh School of Law.

“SCOTUS ruled in favor in the Vance case, but we may never see Trump’s tax records anytime soon. Trump still has defenses he can raise,” Hackney said.

‘Live in Front of a Studio Audience’ returns with lighthearted take on ‘Facts of Life’ and ‘Diff’rent Strokes’
White House issues nationwide call to action on maternal health crisis
Halle Berry says she burned her Razzie Award: “I set that thing on fire”
‘Suge Knight and the Murders of Biggie & Tupac’, Halle Berry on Black progress in Hollywood, and more
Family of Emmett Till to speak about final report on his death
Man arrested, charged in harassment case against Kim Potter judge