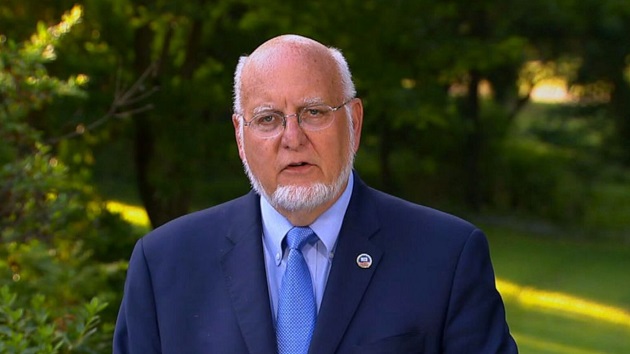 The head of the Centers for Disease Control and Prevention on Thursday struggled to say what federal guidance might look like for the nation’s schools to reopen this fall, after the president said the current advice was too tough and Vice President Mike Pence promised a new approach next week.

In an exclusive interview with ABC’s “Good Morning America” Thursday, CDC Director Robert Redfield said no revisions would be made to the guidance.

“Should the doctors and scientists at the CDC be taking that kind of political direction from the president?” ABC News Chief Anchor George Stephanopoulos asked.

Redfield did not directly answer the question but said he wanted to “clarify” that the guidance isn’t actually changing.

“It’s not a revision of the guidelines, it’s just to provide additional information to help the schools be able to use the guidance that we put forward,” Redfield said.

But just Wednesday, Vice President Mike Pence said changes were coming to make sure the guidelines are not “too tough” after the president tweeted earlier in the day that the guidance was “very tough & expensive guidelines for opening schools.”

“The president said today we just don’t want the guidance to be too tough,” Pence said during a press briefing with the coronavirus task force. “That’s the reason why, next week, CDC is going to be issuing a new set of tools, five different documents that will be giving even more clarity on the guidance going forward.”

White House press secretary Kayleigh McEnany downplayed the discrepancy, insisting that the White House and Dr. Redfield are on “on the same page.”

“The CDC director noted that there would be additional guidance. The vice president noted that as well. But we’re on the same page with with Dr. Redfield,” she said. “I think Dr. Redfield was noting he doesn’t plan to rescind the current guidance that’s out there. It will be supplemental guidance.”

Current CDC guidelines for schools recommend that schools maximize spacing between students’ desks, promote social distancing, have students to eat in classrooms rather than the cafeteria, among other recommendations.

Under repeated questioning Thursday, Redfield would not say whether any of those guidelines would actually be changed as a result of the president’s demand but instead stressed that the guidelines are “intentionally non-prescriptive.”

“Are you revising any of those at the direction of the president?” Stephanopoulos asked.

“Right now we’re continuing to work with the local jurisdictions on how they want to take the portfolio of guidance we’ve given to make them practical for their schools to reopen,” Redfield said.

While stressed the empowerment of local jurisdictions on one hand as he stressed the non-binding nature of the scientifically-based data that his agency has produced, he also sought to push the administration line in calling for schools to be fully operational in the fall.

“The one thing I really want to say that would personally sadden me and I know my agency is in individuals were to use these that we put out as a rationale to keep schools closed,” Redfield said.

“No one wants to keep the schools closed but everybody wants to make sure they’re safe before they are open again. That’s what I keep trying to ask you about,” Stephanopoulous followed up. “Which of these guidelines are looking to relax? Should students be six feet apart?” Stephanopoulos asked.

“I think we have to continue to work with the schools to look between the six feet apart, wearing face coverings, social distancing in seating, looking at changes in schedule to have different crowding. As I said, there is a whole portfolio that the schools can look at to see what’s the right mix for them,” he said.

While President Trump has said on Twitter that ““SCHOOLS MUST OPEN IN THE FALL!!!” and has threatened to cut off funding to jurisdictions that don’t reopen, decisions about school reopening are at the local level and the president has little to no authority at the federal level to order schools to reopen.

While Pence signaled Wednesday that the administration could seek to leverage funding in the next coronavirus relief package to pressure localities to bend to their will, he acknowledged that the president’s threat carries limited punch.

“I think 90 percent of education funding comes from the states; roughly 10 percent, depending on states’ budgets, come from the federal government,” Pence said when asked by ABC News about the president’s threat to cut funding. “And as we work with Congress on the next round of state support, we’re going to be looking for ways to give states a strong incentive and an encouragement to get kids back to school.”

In a later evolution of the administration’s position, Education Secretary Betsy DeVos said Thursday in an interview with Fox News that the Trump administration isn’t actually threatening to pull federal funding but is instead considering “allowing families to take that money and figure out where the kids can get educated if their schools refuse to open.”