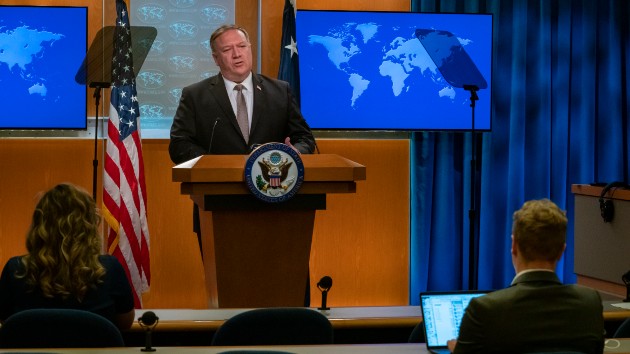 (WASHINGTON) — The United States is leading the world in the number of COVID-19 deaths and cases, but Secretary of State Mike Pompeo said that doesn’t mean the U.S. isn’t also leading the world’s response.

During a press conference Wednesday, he defended America’s role in the world amid the global shock at what many see as the botched U.S. response to the pandemic and President Donald Trump’s decision to withdraw from the World Health Organization.

“Of course the U.S. remains the world leader in the pandemic,” Pompeo told reporters, saying the “world turns its eyes” to American scientists and researchers to develop treatments and to U.S. aid to assist the developing world in fighting their own outbreaks.

To date, the U.S. has provided $1.3 billion to more than 120 countries in emergency health, humanitarian and economic assistance, the State Department said Friday.

But the U.S. has also mismanaged its own response, with inadequate levels of testing or medical supplies, negligible efforts to contract trace or isolate and a rush to reopen in certain states despite the ongoing threat, according to public health experts.

The U.S. passed the threshold into three million confirmed cases of COVID-19 Wednesday, with a death toll approaching 132,000.

“The current state is really not good, in the sense that, as you know, we had been in a situation we were averaging about 20,000 new cases a day, and then a series of circumstances associated with various states and cities trying to open up, in the sense of getting back to some form of normality, has led to a situation where we now have record breaking cases,” Dr. Anthony Fauci, director of the National Institute of Allergy and Infectious Diseases, said Tuesday.

While Trump has repeatedly claimed the U.S. has the world’s lowest mortality rate, it actually has the ninth worst, with 39.82 deaths per 100,000 people, according to Johns Hopkins University.

“We have really a tale of two countries. We have places like New York where death rates continue to plummet because they were so high and now they’re coming down. But in all the hot spots, whether it’s Texas or Florida or Arizona, death rates are starting to climb exactly as we worried about,” said Dr. Ashish Jha, director of Harvard University’s Global Health Institute, adding it means the national death rate will climb again. “I’m really worried about what’s happening in a lot of the hot spots.”

At the same time, Trump formalized his withdrawal of the U.S. from the World Health Organization, notifying the United Nations Monday that the U.S. will depart the agency.

The decision has been roundly criticized by public health experts, allied countries and even some top Republicans.

“Certainly there needs to be a good, hard look at mistakes the World Health Organization might have made in connection with coronavirus, but the time to do that is after the crisis has been dealt with, not in the middle of it,” said Sen. Lamar Alexander, R-Tenn., chair of the Senate Health Committee. “If the administration has specific recommendations for reforms of the WHO, it should submit those recommendations to Congress, and we can work together to make those happen.”

Pompeo didn’t offer any specifics Wednesday, instead blasting WHO for a “long history of corruption and politicization. … On balance, that organization has not been able to deliver on its core mission for decades.”

That contradicts what Pompeo said a little over three months ago, telling Americans to “be aware of and proud of our vast commitments to these important institutions. They not only help citizens around the world, but they protect Americans and keep us safe here as well.”

Pompeo has previously accused the U.N. agency of failing to gather more data on the coronavirus outbreak in its earliest days and cowing to pressure from the Chinese government. But the agency is largely powerless to push back on a government that does not provide it information, a design of reforms the U.S. helped implement over a decade ago.

“The best way to rectify weaknesses in WHO and in wider global health governance is by remaining engaged and outlining a constructive vision for such reform. Not by walking away in a politicized fit of pique,” said Jeremy Konyndyk, a senior fellow at the Center for Global Development. “Withdrawing now, particularly on such specious grounds, will destroy U.S. credibility and diminish U.S. influence over the next generation of reforms that will inevitably follow the present outbreak.”

One example of that with coronavirus was actually cited by Pompeo Wednesday: “Beijing claimed for months that it reported the outbreak of the virus to the WHO. Now we know that’s not true too. We know the WHO’s country office in China reported the outbreak only after it picked up a media statement from the Wuhan Municipal Health Commission.”

By the WHO’s own bylaws, it has no authority to demand that information on its own.

The early warnings WHO did provide were “ample” and included “actionable guidance to countries that were paying attention,” added Konyndyk, who served at the U.S. Agency for International Development under President Barack Obama.

“Had the U.S. followed WHO’s advice on early preparedness, aggressive testing, contact tracing, and other response measures, we would be in a far better place than we are today,” he added.

Instead, the U.S. exit now will likely damage the global response, according to key U.S. allies.

“It is not a good idea to hamper the organization while in the full thrust and brunt of this pandemic,” Germany’s deputy ambassador to the U.S. Ricklef Beutin said Tuesday at the Atlantic Council.

Despite that opposition to U.S. withdrawal, Pompeo said the U.S. has “friends and partners” in other Western democracies against China’s authoritarian model, which he called a “fundamental and fatal flaw” that makes it “incapable of being transparent, of accepting criticism.”

Asked about the European Union’s ban on travel from America, however, Pompeo said the two sides had made “real progress, technical progress” on creating “procedures and protocols… to monitor and measure” travel while allowing it to resume in some restricted way. But he did not provide any specifics or a timeline.