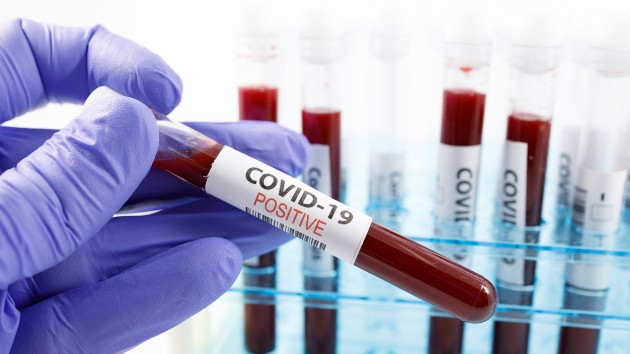 (NEW YORK) — A pandemic of the novel coronavirus has now killed more than 549,000 people worldwide.

Over 12 million people across the globe have been diagnosed with COVID-19, the disease caused by the new respiratory virus, according to data compiled by the Center for Systems Science and Engineering at Johns Hopkins University. The actual numbers are believed to be much higher due to testing shortages, many unreported cases and suspicions that some governments are hiding the scope of their nations’ outbreaks.

Since the first cases were detected in China in December, the United States has become the worst-affected country, with more than three million diagnosed cases and at least 132,309 deaths.

There’s been an upward trend in coronavirus cases among teens and young adults over the last two weeks in Lake County, Illinois, about 40 miles north of Chicago, the county health department said Wednesday.

“We are finding that many young people who attended social gatherings with their friends have become infected,” Dr. Sana Ahmed, medical epidemiologist for the county, said in a statement.

The school has suspended camps until further notice and participants of the poms, football and baseball camps were asked to quarantine for two weeks, the county said.

A case was also linked to an athlete at Vernon Hills High School, the county said.

8:24 a.m.: ICU ward at the heart of Italy’s outbreak is now coronavirus-free

The main hospital in Bergamo, one of Italy’s hardest-hit cities in the coronavirus pandemic, has had its first day without any COVID-19 patients in intensive care.

A spokesperson for Papa Giovanni XXIII hospital told ABC News on Thursday that, “after 137 days, there are no more patients COVID-19 positive in the ICU wards.”

Italy once had the highest number of COVID-19 cases and deaths in the world, with the epicenter in the country’s northern region. The outbreak there now appears to be under control.

In total, more than 242,000 people in Italy have been diagnosed with COVID-19 and at least 34,914 have died — the fourth-highest death toll, according to a count kept by Johns Hopkins University.

The director of the U.S. Centers for Disease Control and Prevention said he believes reopening schools is “a critical public health initiative.”

Speaking to ABC News chief anchor George Stephanopoulos on Good Morning America on Thursday, Dr. Robert Redfield said the CDC’s guidance for protecting against the novel coronavirus remains the same but that the agency will be providing “additional reference documents” to aid communities wanting to reopen their K-12 schools this fall.

The CDC chief noted that the guidelines are not requirements.

“The one thing I really want to say that would personally sadden me, and I know my agency, is if individuals were to use these guidances that we put out as a rationale to keep schools closed,” Redfield said.

Redfield’s comments come after President Donald Trump threatened on Twitter to “cut off funding” to schools that don’t reopen in the fall and criticized the CDC’s guidance as “very tough,” “expensive” and “impractical.”

During Wednesday’s press briefing, Vice President Mike Pence told reporters that the CDC would revise its guidance next week in response to Trump’s critique.

“It’s not a revision of the guidelines; it’s just to provide additional information to help the schools be able to use the guidance we put forward,” Redfield said on GMA.

The CDC’s current guidance for reopening schools calls for 6 feet of space between desks, staggered scheduling and the use of face masks.

When pressed on which of those guidelines were too tough or impractical and would be relaxed next week, Redfield said the CDC would continue working with communities to decide which preventative strategies work best for them.

“These decisions about schools are local decisions,” he added. “We’re prepared to work with any school and school district to see how they can take these guidances, this portfolio of strategies, and do it in a way that they’re comfortable that they can reopen their schools safely.”

The Ohio State University athletics department announced Wednesday night that it has paused all voluntary workouts on campus following the results of its most recent coronavirus testing of student-athletes.

The university previously revealed Wednesday that a total of 125 student-athletes have been tested for COVID-19 as part of proactive screening prior to the start of voluntary summer workouts on campus. At least eight of those test results were positive, according to Columbus ABC affiliate WSYX-TV.

It’s unknown how many others have tested positive since then.

“The university is not sharing cumulative COVID-19 information publicly as it could lead to the identification of specific individuals and compromise their medical privacy,” The Ohio State University Department of Athletics said in a statement Wednesday. “The health and safety of our student-athletes is always our top priority.”

A student-athlete who tests positive for COVID-19 will self-isolate for at least 14 days and receive daily check-ups from the athletics department’s medical staff. Student-athletes who live alone will isolate in their residence, while those with roommates will isolate in a designated room on campus, according to the Ohio State University Department of Athletics.

A toddler in Florida has tested positive for COVID-19 after her mother died from the disease, according to a report by Miami ABC affiliate WPLG-TV.

Shaquana Miller Garrett, 35, contracted the novel coronavirus while working at the front desk of a hospital in Fort Lauderdale. She was a diabetic, considered a higher risk of becoming severely ill with the virus, and had to be hospitalized within days of her diagnosis, her family told WPLG.

Garrett died on July 2, leaving behind a husband and two young children. So far this month, more than a dozen people under the age of 60 have died from COVID-19 in Miami-Dade and Broward counties, according to WPLG.

“She was my best friend,” her brother, Curtis Miller, told WPLG.

Now, her 3-year-old daughter Kennedy is battling the virus. The little girl has developed a fever, according to Miller.

More than 58,000 new cases of COVID-19 were identified in the United States on Wednesday, bringing the national total soaring past three million, according to a count kept by Johns Hopkins University.

The latest daily caseload is just under the country’s record set on Tuesday, when more than 60,000 new cases were identified in a 24-hour reporting period.

A total of 3,055,081 people in the United States have been diagnosed with COVID-19 since the pandemic began, and at least 132,309 of them have died, according to Johns Hopkins. The cases include people from all 50 U.S. states, Washington, D.C., and other U.S. territories as well as repatriated citizens.

By May 20, all U.S. states had begun lifting stay-at-home orders and other restrictions put in place to curb the spread of the novel coronavirus. The day-to-day increase in cases then hovered around 20,000 for a couple of weeks before shooting back up and crossing 60,000 for the first time Tuesday.

Jill Biden cheers on Team USA as Olympic Games get underway in Tokyo, Japan
Washington state deputy shot and killed in the line of duty
What to know about antibody tests in a post-vaccine world
New York City eyes French ‘health pass’ vaccination policy
Key moments from the Olympic Games: Day 1
What is a Golden Slam? Novak Djokovic looks to make men’s tennis history with Olympics