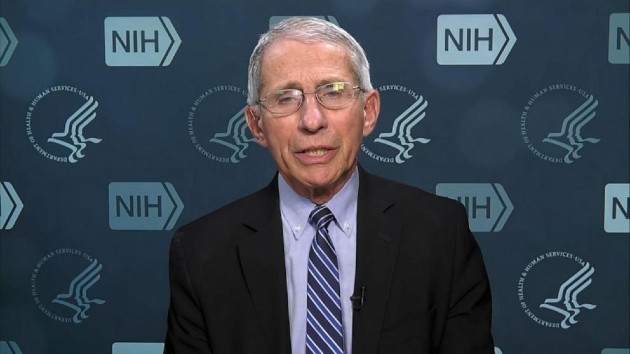 By STEPHANIE EBBS, ABC News(WASHINGTON) — The current state of the COVID-19 pandemic in the U.S. is “really not good,” Dr. Anthony Fauci, the country’s top infectious disease expert, said Monday amid an alarming rise in new cases and hospitalizations.His comments were in stark contrast with those of President Donald Trump, who has sought to play down the danger in states where governors and mayors are struggling to control outbreaks after reopening — outbreaks the president has called “embers.”Fauci said the current state of the pandemic in the U.S. is worsening in part because, unlike Europe, states and cities in the U.S. moved to reopen before the country sufficiently lowered the number of cases.Several states in the south and west have seen surges in the number of people testing positive in recent weeks.The positivity rate in California has reached 6.8%, Gov. Gavin Newsom said Monday, and Arizona has reached 100,000 cases with concerns rising about a lack of available ICU beds in the state.Ten states hit a record high number of new COVID-19 cases over the weekend and nine hit record numbers of current hospitalizations, according to state data compiled by The New York Times and The COVID Tracking Project.”The current state is really not good, in the sense that, as you know, we had been in a situation we were averaging about 20,000 new cases, a day. And then a series of circumstances associated with various states and cities trying to open up in the sense of getting back to some form of normality has led to a situation where we now have record breaking cases. Two days ago it was at 57,500. So within a period of a week and a half. We’ve almost doubled the number of cases,” Fauci said in a livestream with National Institutes of Health Director Francis Collins.”We are still knee deep in the first wave of this. And I would say this would not be considered a wave. It was a surge, or resurgence of infections superimposed upon a baseline, Francis, that really never got down to where we wanted to go. If you look at the graphs from Europe. Europe, the European Union as an entity, it went up, and then came down to baseline. Now they’re having little blips, as you might expect, as they try to reopen, we went up, never came down to baseline, and now we’re surging back up,” Fauci said.”So, it’s a serious situation that we have to address immediately,” he warned.

Fauci said regardless of where you are Americans should continue to wear masks inside and outside, social distance, and avoid crowds. On the younger average age of new cases, Fauci said more of the new cases are in younger people, in part because they are sick of being at home and are returning to social activities, restaurants and bars, but that they are not immune.”Young people should not feel that they’re invulnerable to serious consequences,” he said, adding that even if young people get infected with no symptoms that doesn’t mean it isn’t a problem.”By getting infected they are propagating the outbreak, because inadvertently or innocently, they could infect someone, who’d infect someone, and then all of a sudden someone’s grandmother or grandfather, or aunt who’s getting chemotherapy for breast cancer gets infected. So although you think you’re isolated in a vacuum you’re not, you’re part of the propagation of the pandemic so it’s your responsibility to yourself, as well as to society, to avoid infection. That’s the message, I know it’s difficult to get out to young people, but they really need to understand that,” Fauci said.On the tension around the current outbreaks, Fauci said Americans should not look at public health efforts and reopening the economy as at odds with each other but there should be a balance of all the parameters to use protecting public health as a way to reopen.”I hope they appreciate it, that rather than looking at the public health effort, versus economic opening, as if they were opposing forces,” he said. “They’re not. We should use the public health effort as a vehicle and a pathway to get to safe reopening, it’s not an obstacle. It’s a pathway to do that. So we’ve got to make sure that we don’t create this binary type thing it’s us against them, it’s not. We’re all in it together.” Copyright © 2020, ABC Audio. All rights reserved.