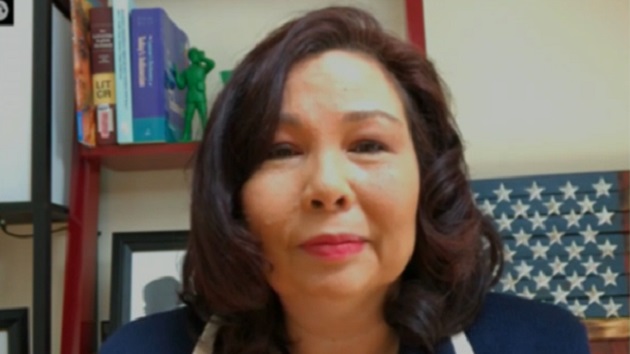 (NEW YORK) — BY: ALLISON PECORINSen. Tammy Duckworth issued a late-night Twitter clapback at right-leaning TV personality Tucker Carlson Monday evening after he questioned her love of America.The war veteran, who lost both of her legs while serving in Iraq and now uses a wheelchair and prosthetic legs, challenged Carlson to “walk a mile in her legs.”Late Monday evening, Carlson featured Duckworth, a senator from Illinois, on his evening show on Fox, criticizing her and other Democratic leaders and arguing that they “despise this country.”Carlson called Duckworth a “deeply silly unimpressive person” in his newscast before featuring a clip of Duckworth on CNN Sunday calling for a “national dialogue” on removing statues of George Washington and other founding figures who were slave owners. Later in the clip, and not shown during Carlson’s segment, Duckworth adds that she thinks “we should listen to everybody” on the subject.Following the clip, Carlson argued that Duckworth and other politicians on the left side of the aisle “actually hate America.”Duckworth lost both of her legs in Iraq when a Blackhawk helicopter she was co-piloting was struck by a rocket-propelled grenade. She is a purple heart recipient.In response to Carlson’s criticism, Duckworth tweeted: “Does @TuckerCarlson want to walk a mile in my legs and then tell me whether or not I love America?”Duckworth has garnered attention in recent weeks as a possible vice presidential pick for Democratic presidential hopeful Joe Biden.She is the lone vice presidential contender with military experience.Carlson said during his show that he generally tries to resist claims that challenge patriotism.”It’s long been considered out of bounds to question a person’s patriotism — it’s a very strong charge and we try not to make it,” Carlson said, before telling his audience that the only logical conclusion to draw is that “these people actually hate America.”Following the TV spot, some users took to Twitter to criticize Carlson for his comments, calling for an apology and, in some cases, a resignation.”This is shameful. Former Lt. Col. Duckworth lost both of her legs in the service of her country, earning a Purple Heart, before she became a US Senator,” tweeted University of Alabama law professor and MSNBC contributor Joyce White Vance. “He owes her a public apology.”But a fellow Illinois lawmaker defended Carlson, who last night stated “you’re not supposed to criticize Tammy Duckworth in any way because she once served in the military.”Rep. Adam Kinzinger, R-Ill., who is also a military veteran, said Duckworth should expect scrutiny as she rises in the ranks of possible vice presidential contenders.

Does @TuckerCarlson want to walk a mile in my legs and then tell me whether or not I love America?

— Tammy Duckworth (@SenDuckworth) July 7, 2020 “Your service is commendable but does not immunize you from criticism especially as you inject yourself into the VP lists,” Kinzinger tweeted Tuesday.

After Joe Biden’s comments on diversity in Black community, some worry blunders could impact support
‘We’re tired of being patient’: 10 months after Hard Rock collapse, bodies inside to be removed
Alaska cruise cut short after passenger tests positive for COVID-19
Doctor delivers baby 25 years after delivering his mom
Alyssa Milano reveals she had COVID-19: “It felt like I was dying”
After Isaias rocks Each Coast, more storms on the way