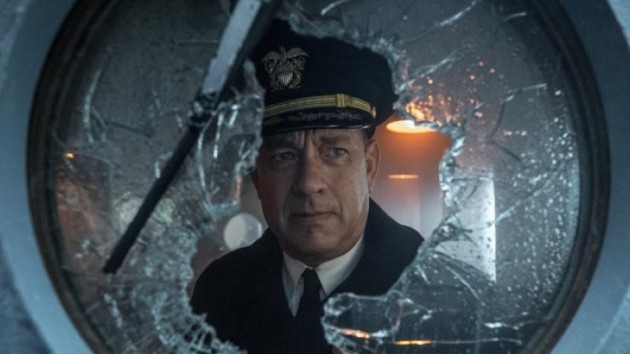 (LOS ANGELES) — One of the casualties of the war on coronavirus in the world of entertainment was Tom Hanks World War II naval drama Greyhound.

In an interview with The Guardian, Hanks describes the decision to bring the movie to streaming instead of the theater was “an absolute heartbreak.”

The two-time Oscar winner, who also wrote the film based on C.S. Forester’s novel The Good Shepherd, was supposed to sail into theaters July 19. Instead, the thriller was scooped up by Apple TV+ in the streamer’s first major movie deal.

Hanks would rather have had the film stream into a theater near you. “I don’t mean to make angry my Apple overlords, but there is a difference in picture and sound quality,” he says.

The actor also talked about performing Zoom interviews to promote the film, during which, “the cruel whipmasters at Apple” took issue with his home office in the background. Instead, he had to shoot against a blank wall, which, Hanks tells The Guardian, made it look as if he’s in a “witness protection program.”

In Greyhound, Hanks plays a U.S. Navy captain who has to steer his ship and a flotilla of others through a virtual shark tank of Nazi U-Boats.

To The Guardian, Hanks also discussed he and wife Rita Wilson’s battle with the disease that sidelined his film. He explained they, “had very different reactions” during the two-weeks they were in quarantine. “My wife lost her sense of taste and smell, she had severe nausea, she had a much higher fever than I did,” Hanks said. “I just had crippling body aches, I was very fatigued all the time and I couldn’t concentrate on anything for more than about 12 minutes. That last bit is kinda like my natural state anyway,” he quipped.