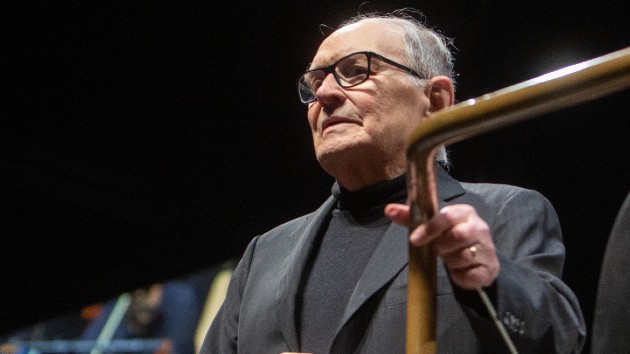 (ROME) — Ennio Morricone, the legendary composer who brought to the big screen everything from the unmistakable howl of The Good, The Bad, and The Ugly’s theme to the haunting, Oscar-winning score of Quentin Tarantino’s The Hateful Eight has died.  He was 91.

The composer reportedly died in Rome from complications of a fall in which he broke his leg.

In a career that spanned decades, Morricone set the scenes for hundreds of films, from the Italian-produced so-called “Spaghetti Westerns” of the 1960s that made Clint Eastwood a star, to Oscar-winning films like The Untouchables and classics like Once Upon a Time in the West.

In 2016, Morricone’s work on Tarantino’s Hateful Eight scored the Italian maestro the Oscar for Best Original Score,  Following a standing ovation, Morricone gave credit to the filmmakers he worked with, which also included a long-standing partnership with Italian film director Sergio Leone. “There is no great soundtrack without a great film that inspires it,” Morricone said at the time.

Morricone also was awarded an honorary Oscar in 2006.  In addition to his Hateful Eight win, he was nominated for Academy Awards for the scores of 1978’s Days of Heaven, 2000’s Malena, 1986’s The Mission and The Untouchables a year after that, and for the 1991 film Bugsy.