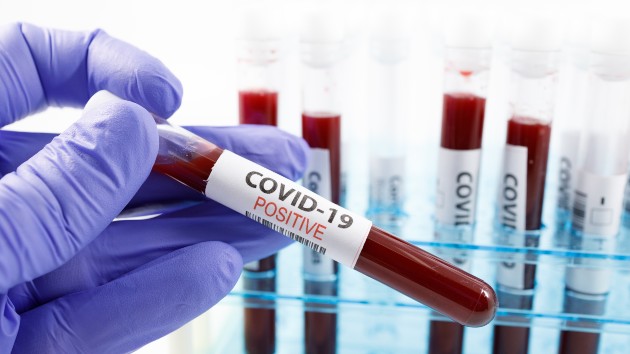 By MORGAN WINSOR, JON HAWORTH and EMILY SHAPIRO, ABC News(NEW YORK) — A pandemic of the novel coronavirus has now killed more than 535,000 people worldwide.Over 11.4 million people across the globe have been diagnosed with COVID-19, the disease caused by the new respiratory virus, according to data compiled by the Center for Systems Science and Engineering at Johns Hopkins University. The actual numbers are believed to be much higher due to testing shortages, many unreported cases and suspicions that some governments are hiding the scope of their nations’ outbreaks.Since the first cases were detected in China in December, the United States has become the worst-affected country, with more than 2.8 million diagnosed cases and at least 130,007 deaths.

1:40 p.m.: Miami-Dade closing restaurants, gyms, rentalsAs cases in Florida surge, Miami-Dade County Mayor Carlos Gimenez on Monday said he’s signing an emergency order to close short-term rentals, gyms, party venues and restaurants, except for takeout and delivery.The order will go into effect on Wednesday.Beaches will open on Tuesday, but if there’s crowding, Gimenez warned that he’ll close them again.”We are still tracking the spike in the number of cases involving 18- to 34-year-olds that began in mid-June, which the county’s medical experts say was caused by a number of factors, including young people going to congested places — indoors and outside — without taking precautions such as wearing masks and practicing social distancing,” Gimenez said. “Contributing to the positives in that age group, the doctors have told me, were graduation parties, gatherings at restaurants that turned into packed parties.”The average age of new cases is 21, according to Gov. Ron DeSantis, who said that may explain, in part, why the state’s fatality rate is so low.DeSantis also said the recent statewide surge is due to increased testing.About 10% of the state’s population has been tested for COVID-19.”No need to be fearful,” DeSantis said at a news conference. “There’s some steps that individuals can take and that we’re going to take statewide, but at the end of the day, this is something that has been around for quite some time.”

12:40 p.m.: Harvard, Princeton announce back-to-school plansHarvard will hold all courses online for undergraduate and graduate students for the 2020-2021 academic year, the university said Monday.Some students will live on campus but will still take classes remotely, the university said.The Faculty of Arts and Sciences is bringing up to 40% of undergraduates to campus, including all first-year students, for the fall semester. Assuming that density remains at 40% in the spring semester, Harvard said it plans to bring seniors back to campus, and freshmen would return home for the spring.Meanwhile, Princeton announced Monday that it will bring roughly half of the undergraduate students back each semester.Freshmen and juniors will come to campus in August and sophomores and seniors will return in the spring, the university said. Undergraduates have the option to spend the entire year remotely.Most of the university’s classes will be online, Princeton said.

12 p.m.: Arizona surpasses 100,000 casesArizona has become the eighth state to surpass 100,000 cases of the coronavirus.As of Monday morning, 89% of Arizona’s ICU beds are full, according to the state’s Department of Health.Arizona now has 3,212 patients in hospitals. At least 1,810 people in the state have died.Arizona joins these states with more than 100,000 cases: New York, California, Florida, Texas, New Jersey, Illinois and Massachusetts.

New York City currently has a 1% positivity rate, Mayor Bill de Blasio said on Monday.”At the height of this crisis,” de Blasio said, 71% were testing positive.Monday marks the start of New York City’s phase 3 reopening which includes nail salons and spas, as well as access to basketball courts and tennis courts.Indoor dining will remain closed.Authorities inspected bars and restaurants this weekend to see how well they were complying with outdoor seating and social distancing. Of 1,000 businesses surveyed, 85% were in compliance, the mayor said.

8:50 am.: NBA star JJ Redick on the return of basketballAs the NBA gears up for its return, New Orleans Pelicans player JJ Redick calls it a “personal decision” whether to play or not, but that he felt a responsibility to his job, teammates and the league.What so many Americans want is normalcy, Redick said, and bringing back sports is a “component of normalcy.” “We want to give the fans something to watch,” he told “Good Morning America” on Monday. The NBA plans to resume its season with 22 teams on July 30 at the Disney complex in Orlando, Florida.”I don’t think it’s wrong to say we shouldn’t play,” Redick said, adding, “we’re gonna try to play. We’re trying to make the best of a bad situation.” “This is an unprecedented time,” Redick said, as he commended the league and union leadership for what he called an “amazing job” creating “an environment where we can go play basketball and, as best we can, only worry about basketball.” “But that’s obviously gonna be very difficult,” he continued. “We’re isolated and away from our families, there’s social unrest, political unrest. … We have to do our job and try to focus on playing basketball to the best we can, but we realize there’s way more important things going on in our country right now.” The Walt Disney Company is the parent company of ABC News

7:25 a.m.: Australia closes state border for first time in 100 years after COVID-19 spikeThe border between Australia’s two most populous states will close tomorrow for an indefinite period of time as authorities scramble to contain an outbreak of the coronavirus in Melbourne.The closing of the border between the states of Victoria and New South Wales marks the first time it will be shut in 100 years. The last time movement was blocked between the two states was in 1919 during the Spanish flu pandemic.The move is expected to deal a blow to Australia’s economic recovery as it heads into its first recession in nearly three decades.The number of COVID-19 cases in Melbourne has surged in recent days and has forced authorities to enact strict social-distancing orders in 30 suburbs, including putting nine public housing towers into complete lockdown.There were 127 new COVID-19 infections announced overnight, the biggest one-day spike since the pandemic began. Two deaths were also reported taking the national total to 106 after no deaths were reported over the previous two weeks.New South Wales Premier Gladys Berejiklian said there was no timetable for reopening the border which will be patrolled by the military to prevent illegal crossings.“It is the smart call, the right call at this time, given the significant challenges we face in containing this virus,” Victoria Premier Daniel Andrews told reporters in Melbourne.Australia has had a total of just under 8,500 confirmed COVID-19 cases since the global pandemic began but the recent surge of an average of 109 cases per day in July compared with the average of just nine cases in the first week of June has raised alarm bells across the country.

6:43 a.m.: NHL, NHLPA finalize protocols for season to resume in Edmonton and TorontoThe NHL and NHLPA have finalized the protocols for the season to resume this summer in Toronto and Edmonton, Alberta, NHL deputy commissioner Bill Daly told ESPN.As of Sunday night, the sides still were finalizing the details of a memorandum of understanding for a collective bargaining agreement extension.The Phase 3 (training camp) and Phase 4 (24-team tournament) return-to-play protocols will need to be approved by the NHLPA’s executive committee, which is composed of one representative from each of the 31 teams. Once that is done, the entire package — both the return-to-play protocol and the CBA extension — will go to a full membership vote of all NHL players. The NHL’s board of governors also must ratify the package.The NHL is now targeting a July 13 start date for training camps, sources told ESPN. If all goes according to plan, teams would travel to the hub cities on July 25 or July 26, and games will begin by Aug. 1. The Eastern Conference teams will play in Toronto, and the Western Conference teams will be in Edmonton.The 24-team tournament will conclude with a Stanley Cup Final in Edmonton, likely in early October.The protocols include an agreement that no player will be penalized if he chooses to opt out, and he does not have to give a reason for wanting to opt out. Players have until 5 p.m. ET on Tuesday to notify their teams if they are opting out.Family members will not be able to join players until the conference finals.According to the document, “all individuals shall maintain physical distancing (a minimum of 6-foot distance) at all times throughout Phase 4, to the extent possible” — which includes being on planes and buses, at restaurants and in any social circumstances. The league will provide face coverings, though individuals may bring their own, and they must be worn at all times in the secure zones. Players do not need to wear face coverings while exercising, and coaches do not need to wear them while on the bench.If teams do not comply with the protocols, it could lead to “significant financial penalties” and potential loss of draft picks.

5:19 a.m.: Over two-thirds of Georgia Tech faculty protest plans to reopenMore than two-thirds of the Georgia Institute of Technology’s academic faculty are protesting the school’s plans to reopen this fall amid the coronavirus pandemic without making face masks mandatory.An open letter, dated July 2, has garnered the signatures of more than 800 professors out of the roughly 1,100 faculty members at the public university in Atlanta. The letter voices concerns that the reopening plans “have been shaped based on guidance from outside the Institute, and with limited input from the faculty who are being asked to carry out these plans.””We are alarmed to see the Board of Regents and the University System of Georgia mandating procedures that do not follow science-based evidence, increase the health risks to faculty, students, and staff, and interfere with the nimble decision-making necessary to prepare and respond to COVID-19 infection risk,” the letter states.The faculty are asking, among other things, that the school require face masks be worn everywhere on campus, provide large-scale COVID-19 testing, ensure timely contact tracing of new infections and make most classes take place remotely during the fall semester. The current reopening plans make masks mandatory for professors, while students are “strongly encouraged” to wear them.ABC News has reached out to the Board of Regents and the University System of Georgia for comment.The letter was first reported by Georgia Public Broadcasting.

3:30 a.m.: US reports over 49,000 new cases in a single dayMore than 49,000 new cases of COVID-19 were identified in the United States on Sunday, according to a count kept by Johns Hopkins University.The latest daily caseload is just under the country’s record high of more than 54,000 new cases identified last Thursday.The national total currently stands at 2,888,729 diagnosed cases with at least 129,947 deaths, according to Johns Hopkins. The cases include people from all 50 U.S. states, Washington, D.C., and other U.S. territories as well as repatriated citizens.By May 20, all states had begun lifting stay-at-home orders and other restrictions put in place to curb the spread of the novel coronavirus. The day-to-day increase in cases then hovered around 20,000 for a couple of weeks before shooting back up and crossing 50,000 for the first time last week.Nearly half of all 50 states have seen a rise in infections in recent weeks, with some — including Arizona, California and Florida — reporting daily records. Copyright © 2020, ABC Audio. All rights reserved.