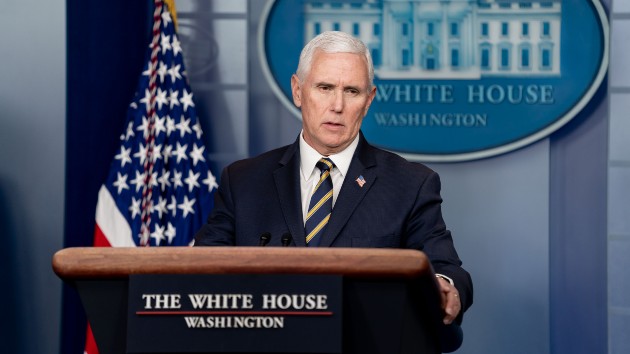 By JACK DATE, ABC News(WASHINGTON) — Secret Service agents in Arizona on Monday tested positive for COVID-19 or showed signs of illness while preparing for a trip involving Vice President Mike Pence, leading to the government postponing the trip originally planned for Tuesday to Wednesday, a government official familiar with the matter tells ABC News.The delay was needed for the Secret Service to bring in a new team of healthy agents in to Phoenix to complete the trip, according to the official.”The health and safety of our workforce, their families, and that of our protectees remains the agency’s highest priority,” Secret Service Communications Director Catherine Milhoan said in a statement.The Washington Post first reported late Thursday that “eight to 10 agents and other officers from sister agencies” had fallen ill preparing for the Arizona trip.On the trip, the vice president acknowledged “the dramatic rise of coronavirus cases in Arizona” while at the same time praising Gov. Doug Ducey’s handling of the virus.”Up until roughly three weeks ago, Arizona had literally set the pace in slowing the spread, in flattening the curve, and we’re grateful to you, to your team,” Pence told the governor. Later, he said: “The rising cases in Arizona is why I’m here.”This is the second time in nearly two weeks that agents have tested positive for COVID-19 while preparing for a presidential or vice presidential trip.At least two agents tested positive for COVID-19 before an indoor campaign rally in Tulsa, Oklahoma, late last month.Dozens of agents and other Secret Service personnel began to self-quarantine for 14 days after that trip due to potential exposure to those infected agents. At that time, the USSS said it would not affect operations.”The U.S. Secret Service remains prepared and staffed to fulfill all of the various duties as required,” Milhoan said in a statement on June 24. “Any implication that the agency is in some way unprepared or incapable of executing our mission would be inaccurate.””To protect the privacy of our employees’ health information and for operational security, the Secret Service is not releasing how many of its employees have tested positive for COVID-19, nor how many of its employees were, or currently are, quarantined,” the statement continued.The Secret Service employs approximately 3,200 special agents, 1,300 uniformed division officers and 2,000 support personnel.Pence visited Florida on Thursday, the latest stop in a schedule taking him to various regions particularly hard hit by the coronavirus pandemic. Copyright © 2020, ABC Audio. All rights reserved.