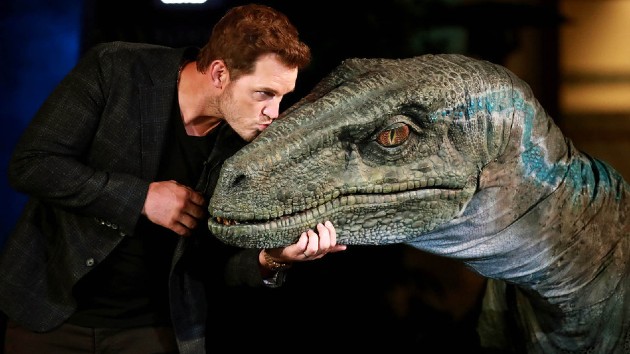 Pratt confirmed the news while video-chatting with Terry, a winner of the 41-year-old actor’s All In Challenge, which included the one-on-one chat and a role in Dominion, in where he’ll be “destroyed in the jaws of an animated dinosaur.”

“It’s been an honor to be part of the #AllInChallenge which has raised over $59 MILLION to help feed the hungry during this global crisis! Congrats Terry!! The world can’t wait to see you get eaten by a dinosaur!” Pratt captioned the video, posted to his official Twitter page.

The All In Challenge was organized by Michael Rubin, the founder of Fanatics and co-owner of the Philadelphia 76ers, and gives fans a chance to both win and bid on one-of-a-kind experiences and items.

Meanwhile, Universal Studios, which is producing Dominion, is following strict safety protocols, including testing the entire cast and crew before returning to set, with regular testing to take place for the duration of filming, according to Deadline.

The movie’s main cast, including Pratt and co-star Bryce Dallas Howard, reportedly carried out a two-week quarantine upon arriving in England from the U.S., per new government regulations, and do the same before traveling back to the States as well.