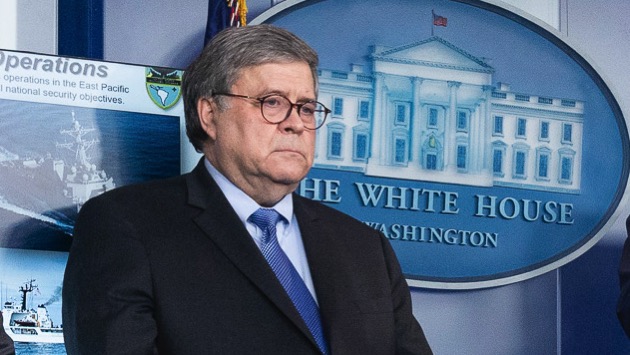 By LUKE BARR, ABC News(WASHINGTON) — The American Civil Liberties Union has joined with a law firm to sue Attorney General William Barr and other federal officials in order to delay a federal execution that’s scheduled to be carried out later this month, claiming it is unsafe because of coronavirus.The execution is the second of four that the government has scheduled for this summer and which the ACLU argues could become “super-spreader events,” according to the ACLU.The plaintiffs are hoping to postpone the federal execution of Wesley Purkey — scheduled for July 15 — arguing that Purkey’s witness and spiritual minister, Rev. Seigen Hartkemeyer, a 68-year-old Buddhist priest with lung-related illnesses, would be exposed to the virus if he attended the execution at an Indiana prison. The lawsuit argues that forcing Rev. Hartkemeyer to risk his health in order to perform his religious duties violates the Religious Freedom Restoration Act.”Trump officials claim to champion religious freedom yet, once again, have no qualms about trampling those rights when it suits their political agenda,” said Heather L. Weaver, senior staff attorney for the ACLU’s Program on Freedom of Religion and Belief, according to an ACLU press release. “There is no reason to resume federal executions during a pandemic, especially when it would keep a priest from performing his religious commitments to a man about to lose his life.”Purkey was sentenced to death in 2003 after he was convicted of killing a young girl, raping her and dismembering her body. Purkey also was convicted on the state level for using a claw hammer to bludgeon to death an 80-year-old woman who suffered from polio and walked with a cane, according to the Justice Department.Litigation on the method of federal executions has delayed the four executions which were originally scheduled for December 2019. Last November, a judge initially halted the executions because of the method in which the federal government planned on carrying out the executions. The judge in the lower court took particular issue with the combination of drugs the government used.That was overturned by a higher court and on Monday, the Supreme Court denied the petition to halt the execution of Purkey and three others, setting in motion the first federal executions in 17 years. During the 17-year hiatus, executions continued to be carried out on the state level but in 2014, then-president Barack Obama ordered the Justice Department to review how the death penalty is applied after a botched execution in a state prison in Oklahoma.Allowing spiritual leaders at executions have been tackled by the Supreme Court in the past year, according to the ACLU. In 2019, the Supreme Court issued a stay in the case of Patrick Murphy, a Texas inmate who was sentenced to death. The court said that Murphy should not be executed unless a “Buddhist spiritual advisor or another Buddhist reverend of the State’s choosing to accompany Murphy in the execution chamber during the execution.”Similarly, the Supreme Court issued a stay earlier this month in Ruben Gutierrez’s case. Gutierrez, who was sentenced to death for killing an elderly woman, claimed his religious rights were violated when Texas didn’t allow spiritual advisors in the execution chamber. But the justices did allow the execution of Domineque Ray in February of 2019, despite the fact that he was a Muslim prisoner in Alabama, where the government only allowed a Christian chaplain in the execution chamber.Rev. Hartkemeyer claims it’s his obligation to be by Purkey’s side when he is put to death.”It’s vital that I be there, as Wes’s priest, to ensure this peaceful transition from life to death during his most dire moment of distress — his ultimate crisis — as he sits at the threshold of death. I will chant from behind a plexiglass barrier to ensure his peace of mind while passing and, through my physical presence, serve as a spiritual reminder to Wes of all the religious lessons I have taught him as he passes on from this life. This is my sacred duty,” Rev. Hartkemeyer wrote in a blog post.Dr. Simone Wildes, an infectious disease infectious diseases physician at South Shore Health, said there is no reason to hold an execution during a pandemic, given the health risks.”In the midst of the coronavirus pandemic with increasing numbers of cases in a number of states, an execution is not a medical emergency especially given the fact that an execution has not occurred in 17 years in Indiana,” Wildes, an ABC News contributor said. “It is not necessary to put people at risk for coronavirus to witness an execution. It might be better to wait until the number of cases are better controlled across state lines or even when a vaccine and definitive treatment is available.”Wildes says that because this is the first time prisons will be accepting visitors, protocols put in place will be put to the test.But Barr has said that the crimes committed by the four men set for federal execution this summer are “heinous” and that, “The American people, acting through Congress and Presidents of both political parties, have long instructed that defendants convicted of the most heinous crimes should be subject to a sentence of death.””The four murderers whose executions are scheduled … have received full and fair proceedings under our Constitution and laws,” he said. “We owe it to the victims of these horrific crimes, and to the families left behind, to carry forward the sentence imposed by our justice system.”ABC News did not receive an immediate comment on the lawsuit from the Justice Department. Copyright © 2020, ABC Audio. All rights reserved.