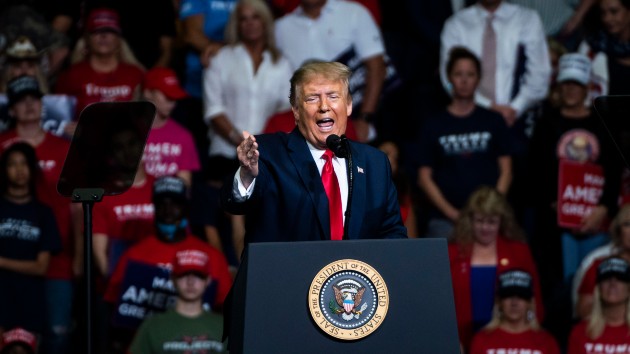 By JOHN SANTUCCI, WILL STEAKIN and KATHERINE FAULDERS, ABC News

(WASHINGTON) — Trump campaign chief operating officer Michael Glassner, who had been heavily involved in planning the president’s rallies, has been replaced by Trump’s 2016 Arizona chair Jeff DeWit, a major shakeup at the top of the president’s campaign following the Tulsa rally debacle and four months from Election Day, multiple sources tell ABC News.According to the Trump campaign, Glassner, who has worked on the president’s campaign since 2015, will have his role shifted to focus on the campaign’s many lawsuits heading into the fall. The shake up and Glassner’s reassignment are in part a result of how badly things went in Tulsa, sources tell ABC News.“This is not a reaction to Tulsa. Michael Glassner is moving into the long-term role of navigating the many legal courses we face, including suits against major media outlets, some of which will likely extend beyond the end of the campaign. He is one of the founding members of Team Trump and his dedication to the success of the president is unmatched,” Trump campaign communications director Tim Murtaugh said in a statement to ABC News.DeWit served for less than two years as NASA’s chief financial officer and during the 2016 campaign was the Trump campaign’s chief operations officer.The news was first reported by Axios. Copyright © 2020, ABC Audio. All rights reserved.

One dead, six injured after boats collide on Georgia lake
COVID-19 vaccinations up 14% in past week, White House says
New legislation would require women, like men, to sign up for potential draft
Clara McGregor shows off fresh face, a month after dog bit her
Chrissy Teigen thanks fans for sending the “most amazing” condolences after loss of baby Jack
How sustainable is it to rent clothing? Experts and top brands weigh in