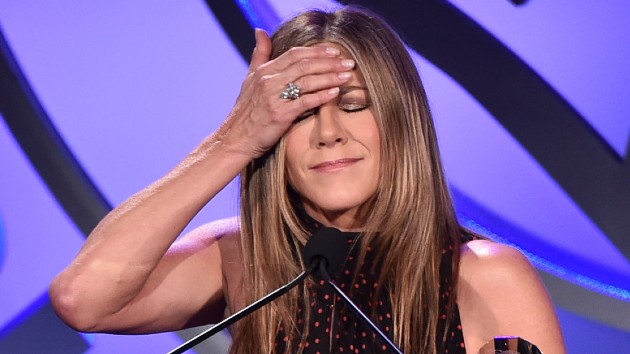 (LOS ANGELES) — The time for debate over wearing a face mask is over says Jennifer Aniston, who officially joined the leagues of celebrities and politicians urging people to prevent the spread of COVID-19.  The U.S. is currently documenting roughly 40,000 new cases a day, which Dr. Anthony Fauci said on Tuesday.

Fauci says that one of the best ways to reduce the spread of COVID-19 is to wear a mask, a recommendation that has become politicized between it being a public health service versus an attack on personal freedom.

Now, the Friends alum is putting an end to the debate by demanding that everyone come together to flatten the curve.

Speaking out on Tuesday, Aniston uploaded a makeup-free selfie of her proudly wearing a facial covering.  “I understand masks are inconvenient and uncomfortable,” she relayed to her 34.4 million followers.

She then impressed upon the fact that wearing a mask should be the least of everyone’s problems. “Don’t you feel that it’s worse that businesses are shutting down… jobs are being lost… health care workers are hitting absolute exhaustion,” The 51-year-old queried. “And so many lives have been taken by this virus because we aren’t doing enough.”

The U.S. has been the hardest-hit nation in the world when it comes to confirmed COVID-19 fatalities, with Johns Hopkins University putting the national death toll at over 127,000.

Aniston noted that while many are trying to do the right thing by wearing masks, the effort needs to be unanimous among Americans. “This simple and effective recommendation is being politicized at the expense of peoples’ lives. And it really shouldn’t be a debate,” The Morning Show star stressed.

“If you care about human life, please… just #wearadamnmask and encourage those around you to do the same,” she imparted.