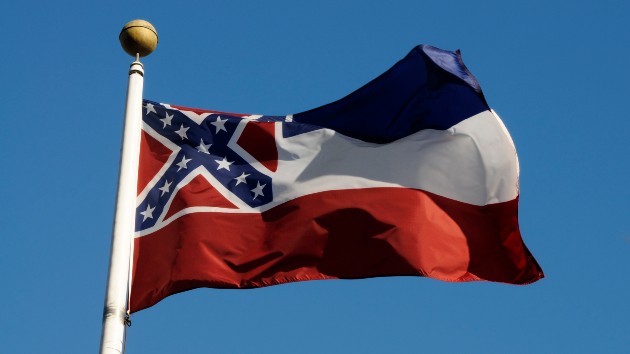 By MEREDITH DELISO, ABC News(JACKSON, Miss.) — Mississippi Gov. Tate Reeves has signed a bill to remove the Confederate battle emblem from the state flag.At the signing ceremony on Tuesday evening, Reeves said the law would “turn a page” for Mississippi, adding: “This is not a political moment to me but a solemn occasion to lead our Mississippi family to come together, to be reconciled and to move on.”Reeves acknowledged that while some aren’t in favor of the change, those who “fear a chain reaction of events erasing our history,” the state needs to find a “better emblem for all Mississippi.”The governor’s signature comes two days after the Mississippi Legislature voted to change the flag.On Saturday, Reeves had said he would sign the bill if the Legislature passed it. That afternoon, the state House and state Senate passed measures allowing for a vote on changing the flag. On Sunday, the state House voted 91-23 to remove the emblem. The state Senate passed the bill 37-14.The Confederate “stars and bars” has been part of Mississippi’s flag since 1894. It’s the only remaining state flag that includes the emblem, which is widely considered racist because of its ties to slavery and use by white supremacy groups.According to the text of the bill, the flag must be retired within the next 15 days and the state Department of Archives and History has to develop a plan for the “dignified and respectful removal of the former official Mississippi State Flag.”ABC News has asked the governor’s office when the final lowering of the flag at the state capitol will take place and has not yet received a response.A nine-member commission will be established to present a new state flag option by Sept. 14, and the public will vote on it on Nov. 3. The new flag is not allowed to include a Confederate emblem and must include the words “In God We Trust.” Reeves said Tuesday that he “fought to put those words on our state seal.””The people of Mississippi, black and white, and young and old, can be proud of a banner that puts our faith front and center,” he said.Across the country, symbols of the Confederacy are being contested amid calls for racial justice following the death of George Floyd while in police custody last month. Earlier this month, NASCAR banned the Confederate flag at its events. Monuments to Confederate generals are also coming down in cities and towns across the country.Former Vice President Joe Biden reacted to the Mississippi legislature’s vote late Sunday.”The arc of the moral universe bent a little bit more today,” Biden tweeted, referencing Martin Luther King Jr.’s quote from a 1968 speech.ABC News’ Joshua Hoyos, Carena Liptak, John Verhovek and Jason Volack contributed to this report.Copyright © 2020, ABC Audio. All rights reserved.