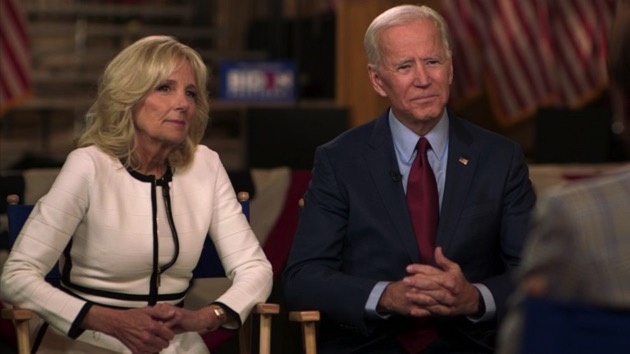 By MOLLY NAGLE, ABC News(NEW YORK) — Former second lady Dr. Jill Biden says she believes that support for President Donald Trump has weakened in the wake of COVID-19 and because her husband is “a moderate,” during an appearance on ABC’s The View on Tuesday morning.”From what I’ve seen a lot of Republicans are going to vote for Joe, and they’ve been saying it. Maybe they’re not saying it publicly, but when I was out there on the trail, a lot of people came up to me and said, ‘Jill, I’m a Republican, but I’m going to vote for your husband because he’s a moderate, and he’s a steady leader and we believe in Joe,'” Biden said, recalling sentiments shared with her before coronavirus largely shut down the campaign trail in March.”Of course, Trump has his supporters, but I think a lot of his supporters have become disillusioned, especially in the way that he’s handled this pandemic,” she added.The suggestion of her husband’s moderate appeal comes as Biden has taken steps to gain the support of more progressive Democrats after becoming the presumptive Democratic nominee in April when Sen. Bernie Sanders ended his presidential campaign.During her appearance on The View, Biden was also asked about her husband’s highly anticipated vice presidential pick, saying she believes that women of color should serve at all levels of government but stopping short of saying Biden should choose a woman of color as his running mate.”I think we need women of color in every level of government, in every branch of government and especially on the Supreme Court, which Joe has committed to do, to put a woman of color on the Supreme Court,” Biden said during her appearance Tuesday morning.”Joe has to…look at all the choices. He has to listen to the committee that was set up. But most importantly I think he has to look for someone who has the values that he wants in a running mate, and especially the values in governing just like he had — he and Barack[Obama] had,” Biden continued.Biden was also asked if she had “cleared the air” with vice presidential candidate Sen. Kamala Harris after the senator’s blistering attack of Biden during the first Democratic debate in June of 2019 over his past stance on busing in the 1970s and his praise for segregationist senators during a fundraiser — comments he later apologized for.”It’s politics, and you get over it, you just move on. You have to, right? I mean you can’t just keep harboring ill will. And so, it’s just part of what politics is,” Biden told the co-hosts.Questions about the impact of the stinging debate exchange on Harris’ vice presidential outlook had been raised in light of Biden’s comments in her 2019 book that while her husband doesn’t hold grudges, she often does.”I remember every slight committed against the people I love. I can forgive, sure — but I don’t believe in rewarding bad behavior,” Biden wrote.Biden, who appeared remotely from her home in Wilmington, Delaware, has largely campaigned virtually for her husband as coronavirus continues to impact the country, and she said that while the former vice president would love to be back on the trail, the campaign is continuing to listen to public health experts’ advice.”We’re listening to the doctors and the scientists and what they’re saying to us, and they’re saying, ‘don’t go out there.’ And so we’re listening to them,” Biden said, noting both she and the former vice president continue to connect with voters virtually.”That’s how we’re campaigning and will continue to campaign until the doctors say it’s safe.”Despite his light campaign schedule, several recent polls have shown Biden leading Trump nationally and in critical battleground states needed to win the White House in November.When asked about her husband revealing he’s concerned Trump will try to “steal the election” in November, the former second lady assured the hosts that action was being taken by Democrats and their campaign to secure the vote, but stressed the need for voters to engage.”I hope all of your viewers don’t take anything for granted. And I hope that…everybody gets out there and votes. I hope they register to vote, if they’re able to vote by mail I hope they do that. You know, they have to talk to their friends and their family,” Biden said.Biden appeared on The View to promote her new children’s book, Joey, a picture book that tells the life story of her husband — including his struggles with a stutter as a child, something Biden himself has often talked about on the campaign trail.”He had to fight bullies because he was bullied because he was a stutterer. So, I hope that kids read the book and take it to heart that with hard work you can overcome adversity and be or become whoever or whatever you want to do,” Biden said. Copyright © 2020, ABC Audio. All rights reserved.