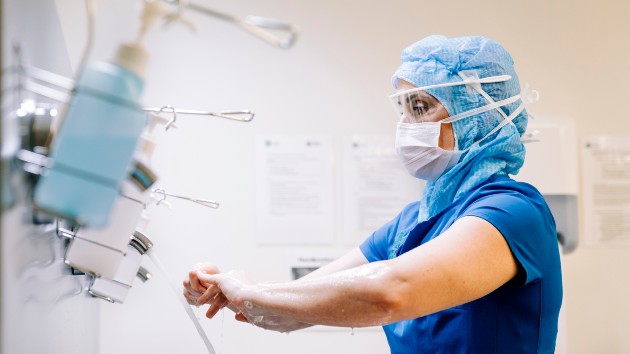 By SUSAN SCHWARTZ, ABC News(NEW YORK) — A handful of front-line health care workers who have been away from home helping patients fight the coronavirus have once again hugged their children after spending months apart.Charlotte Cole embraced her 2-year-old son George after three long months. “I’ve never seen him run so fast and he grabbed on to us so tightly. I never wanted to let him go,” the nurse and mother from England told South West News Service Ltd.Other health care workers around the U.S. have finally reunited with their kids after they made the tough decision to keep them safe from potential exposure to COVID-19.Mary Ann Dakkak, a doctor at Boston Medical Center who has been on the front lines, recently saw her children Eli and Isabelle Tauches, who are 8 and 10 years old respectively, for the first time in more than 90 days.”I love my kids,” Dakkak told ABC News Sacramento affiliate KXTV after she landed at the airport in California. “It’s really good to have my kids.”She was separated by more than 2,000 miles while her two kids stayed with her parents as she helped battle the ongoing outbreak.”I knew I was going to be leading a COVID team,” she told ABC News. “I said ‘Dad, it might be three to six months,” to which her parents said “I don’t care.”But the separation took its toll, especially on the young ones.Paisley McGraw, a 4-year-old who thought she was going to the Phoenix, Arizona, airport to watch airplanes with her dad, was stunned to see her mom Cahlie McGraw instead.McGraw, a pediatric nurse who left the Grand Canyon State for New York to help work on the front lines, finally saw her young daughter after spending 68 days away.