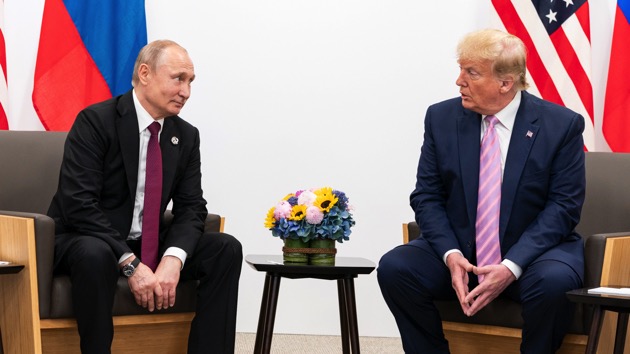 By JOHN PARKINSON, ABC News(WASHINGTON) — Following a White House briefing Tuesday morning regarding reports that Russia offered bounties to the Taliban to kill U.S. military personnel, House Democrats renewed their call for an all-Member briefing from the intelligence community — “so we’d have direct evidence and discussion from intelligence community into how credible they assess the information.”House Majority Leader Steny Hoyer called the intelligence a “red flag” and said the American people must understand whether the United States’ relationship with Russia is “compromised by the relationship between the president and Mr. Putin.”“It either was not waved, or the president ignored the wave,” Hoyer, D-Md., said. “We need to get to the bottom of this. What we need is a briefing by the intelligence community to give us their assessment of the credibility of this information and we need to know from the White House what action would have been taken.”The Democrats were briefed by Director of National Intelligence John Ratcliffe, National Security Adviser Robert O’Brien and White House Chief of Staff Mark Meadows, the same three officials who briefed a group of Republicans at the White House on Monday.While there are reports that the bounty program was not fully verified by the U.S., House Intelligence Chairman Adam Schiff insisted Trump should have been briefed “with caveats.”“Don’t deprive the president of information he needs to keep the troops safe because you don’t have it sign, sealed and delivered,” Schiff, D-Calif., said. “If you’re going to be on the phone with Putin, this is something you ought to know.”Schiff said that as Congress examines the reports on the bounties, Trump should not be inviting Russia into G7 or G8 or “further ingratiating Russia into the community of civilized nations.”“I find it inexplicable in light of these very public allegations that president hasn’t come before the country and assured the American people that he will get to the bottom of whether the Russians are putting a bounty on the heads of American troops,” Schiff said. “And that he will do everything in his power to protect American troops.”“If there’s a problem with being able to brief the president on intelligence he doesn’t want to hear, that’s a problem for entire country’s national security,” Schiff added.House Foreign Affairs Chairman Eliot Engel said that if the bounty report “isn’t something to go crazy about, then I don’t know what is.”“It just makes no sense at all,” Engel, D-N.Y., said. “Why doesn’t the president question Putin? Why doesn’t the president condemn what Putin has done? Why doesn’t the president stand up for the United States? I mean, for God’s sake, these are our soldiers and if we’re not going to protect them, what are we going to do?”Hoyer said he received a phone call Sunday evening from White House chief of Staff Mark Meadows inviting him to put a group of eight to 10 Democrats together for a briefing at the White House, but he maintained that the briefing “was not as a substitute” for House Speaker Nancy Pelosi and Sen. Chuck Schumer’s requests for a full briefing for all Members of Congress.“The president called this a hoax publicly. Nothing in the briefing that we have just received led me to believe it is a hoax,” Hoyer added. “There may be different judgments as to the level of credibly but there was no assertion that the information we had was a hoax.”While the lawmakers refused to discuss details of the briefing due to its secret nature, Schiff emphasized that the briefing fell short — complaining that the “right people to give the briefing really were not in the room.”“We need to hear from the heads of the intelligence agencies about how do they assess the allegations,” Schiff said. “What can they tell us about the truth or falsity of these allegations? What can they tell us about steps they are taking or undertaking to vet the information they may have?”Hoyer added that the White House briefing did not reveal “any new substantive information” and the White House did not assure Democrats that their request for an all-Member briefing would be fulfilled.Several House Republicans received a similar briefing on Monday, while Senate Republicans planned to attend their own briefing later Tuesday.House GOP leaders on Tuesday forcefully condemned Russia following briefings on the intelligence regarding their bounties reportedly put on U.S. troops in Afghanistan — using much sharper language than the White House on the subject.”America’s adversaries should know, and should have no doubt, that any targeting of U.S. forces by Russians, by anyone else, will meet a swift and deadly response,” Rep. Liz Cheney, R-Wyo., the No. 3 House Republican, said Tuesday.House Minority Leader Kevin McCarthy, R-California, defended the Trump administration’s record on Russia – touting the sale of Javelin anti-tank missiles for Ukraine – while slamming what he called the “selective leaking” behind the initial New York Times report and accusing Democrats of “playing politics.””The idea that someone would try to do something selective, inside a report, to play games, is unacceptable. It doesn’t matter what party you are in. And we should not play any games with this,” he said.As Trump faces criticism for not responding to the intelligence suggesting the targeting of U.S. troops, McCarthy offered a defense of the president, calling the safety of service members his “top priority.””I’ve been with this president when we’ve gone to Dover. I’ve watched his face. I’ve watched him console families. I’ve spoken with him at night when he has to call families. I will tell you it is his top priority,” he said. Copyright © 2020, ABC Audio. All rights reserved.

Bada Bing! ‘Monopoly: The Sopranos Edition’ is here
How sustainable is it to rent clothing? Experts and top brands weigh in
Some people making $100K or more say the benchmark for financial success has shifted
Zendaya is the woman of Timothee Chalamet’s dreams in action-packed trailer for ‘Dune’
Frontline workers in Nevada say they are ‘reliving 2020’ as new infections surge to highest point in five months
Half of Puerto Rico could lose health coverage if Congress doesn’t act on Medicaid