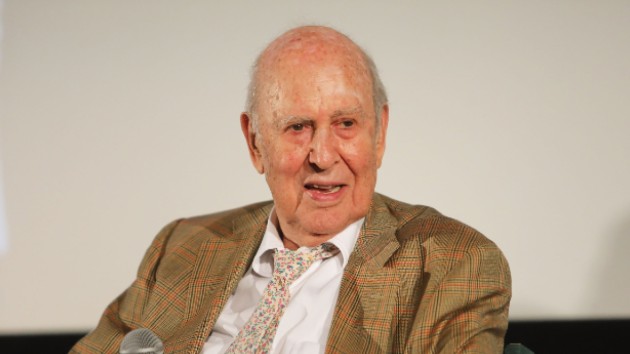 A rep for the star, who spent more than 60 years in show business, confirms to ABC News that Reiner died Monday at his Beverly Hills, California home surrounded by his family.  Reiner’s son, actor and filmmaker Rob Reiner, also tweeted the news, writing, “Last night my dad passed away. As I write this my heart is hurting. He was my guiding light.“

Before going on to create The Dick Van Dyke show, in which he also co-starred as egocentric TV star Alan Brady, former wartime radio operator Reiner wrote for Sid Caesar and his groundbreaking 1950s TV series Your Show of Shows, where he met another young writer, Mel Brooks, with whom he collaborated for decades, and with whom he remained close until the end.

Carl Reiner and Mel Brooks achieved fame as an occasional comedy duo with The 2000 Year Old Man, a skit they created in 1961.  Reiner played the straight man, interviewing Brooks, who played the titular character, providing off-the-wall answers about historical events at which he said he was present and personages he knew.  The piece became a smash hit, spawning sequels over the years and eventually winning the pair a Grammy in 1998 with The 2000 Year Old Man in the Year 2000.

As a filmmaker, Reiner directed such comedy classics as 1977’s Oh God with George Burns, 1979’s The Jerk with Steve Martin, and the Steve Martin/Lily Tomlin hit All of Me in 1984.  As an actor, he appeared in dozens of TV shows and films.  Most recently, he played the role of con man Saul Bloom opposite George Clooney, Brad Pitt, Matt Damon and an all-star cast in the Ocean’s 11, 12 and 13 trilogy of heist films for director Steven Soderbergh.  In television, Reiner later did voiceover work in shows like King of the Hill, Family Guy, Bob’s Burgers and more.  He also appeared with his lifelong friend Brooks in a 2012 installment of Jerry Seinfeld’s Netflix show Comedians in Cars Getting Coffee.

Among the many accolades Reiner earned over the years are nine Emmys, one Grammy, and the 2000 Mark Twain Prize for American Humor.

Reiner was married once, to Estelle Lebost, who died in 2008 after 64 years together.  They had three children.