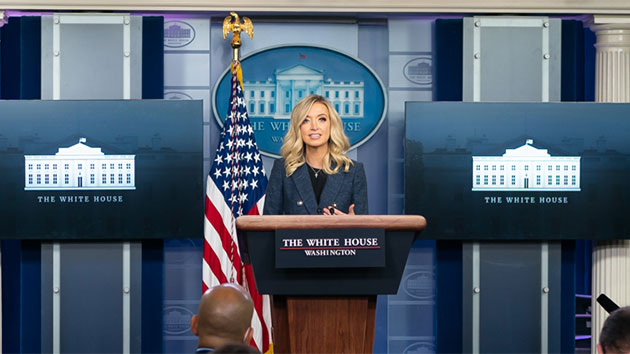 By Ben Gittleson and Katherine Faulders, ABC NewsThe White House on Monday continued to deflect questions about reports U.S. intelligence determined Russia offered bounties to the Taliban to kill U.S. troops in Afghanistan, saying “the veracity” of such allegations is still being determined and insisting that President Donald Trump had yet to be briefed on the potentially politically damaging matter.”There is no consensus within the intelligence community on these allegations,” press secretary Kayleigh McNenay told reporters, “and in effect, there are dissenting opinions from some in the intelligence community with regards to the veracity of what’s being reported, and the veracity of the underlying allegations continue to be evaluated.”But even as she spoke — and administration officials were briefing concerned members of Congress at the White House — she repeatedly said Trump himself still “has not been briefed on the matter.”The intelligence “would not be elevated to the president until it was verified,” she said.Asked by reporters, “Does the president have a specific message for Moscow given these reports?” she responded, “A specific message for Moscow? No, because he’s not been briefed on the matter, as I noted.”Yet Sunday night, Trump tweeted: “Intel just reported to me that they did not find this info credible, and therefore did not report it to me or @VP . Possibly another fabricated Russia Hoax, maybe by the Fake News @nytimesbooks, wanting to make Republicans look bad!!!”Asked what Trump meant when he tweeted that, McEnany replied: “I have no further details on the president’s private correspondencShe said that last night, White House Chief of Staff Mark Meadows called Senate Majority Leader Mitch McConnell and House Majority Leader Steny Hoyer “and said that he would be briefing eight members from the committees of jurisdiction, so there was a bipartisan invitation extended,” she said, declining to provide further details.Asked what Trump would do to hold Russia accountable if the intelligence is borne out to be true, she said, “I won’t speculate on whether this intelligence is verified or not verified and I won’t get ahead of the president on further actions.”She said Trump had “been extremely strong on Russia, imposing sanctions on hundreds of Russian individuals, expelling dozens of diplomats, closing two Russian consulates, withdrawing from an INF treaty and several other actions.”Pushed on what she meant that Trump hadn’t been briefed — and if that meant it wasn’t in the President’s Daily Brief (PDB) — she replied, “He was not personally briefed on the matter.”It was unclear which members of Congress got briefed.House Speaker Nancy Pelosi and Senate Minority Leader Chuck Schumer called for briefings of their respective legislative body’s full membership.While the White House did not specify how many members had been invited, the official said the gathering would not take the form of a meeting of the “Gang of Eight” — a bipartisan group of senior lawmakers regularly briefed on sensitive intelligence.Pelosi, a member of the “Gang of Eight,” said on Sunday in an interview with ABC News Chief Anchor George Stephanopoulos that she had not been briefed on the topic.The New York Times reported Friday that U.S. intelligence officials had determined a Russian military intelligence unit had offered militants tied to the Taliban bounties for killing U.S. and other international troops in Afghanistan.A military official confirmed to ABC News that U.S. intelligence agencies had determined that to be the case and said Russia had taken the step over the past year, amid peace talks to end the 18-year war in Afghanistan.President Donald Trump denied that he or vice president had been briefed about the determination, as The New York Times reported Friday.”Nobody briefed or told me, @VP Pence, or [White House] Chief of Staff @MarkMeadows about the so-called attacks on our troops in Afghanistan by Russians,” Trump tweeted Sunday, lambasting the Times’ story. “Everybody is denying it & there have not been many attacks on us.”Director of National Intelligence John Ratcliffe wrote on Twitter Saturday night that “neither the President nor the Vice President were ever briefed on any intelligence alleged by the New York Times in its reporting yesterday.”Pelosi on Monday morning wrote in a letter to the director of national intelligence and the head of the Central Intelligence Agency that the revelation was “very disturbing” and requested an immediate interagency briefing for all House members.”The questions that arise are: was the President briefed, and if not, why not, and why was Congress not briefed,” she wrote.Immediately following the letter, a senior White House official said the White House did not plan to schedule a briefing for all members of the House this week.Schumer similarly called for all senators to be briefed on the reports.”We need to know whether or not President Trump was told this information, and if so, when,” Schumer said in a statement.Senators on the other side of the aisle also voiced concern.Trump ally Sen. Lindsey Graham, R-S.C., tweeted Saturday that it was “imperative Congress get to the bottom of recent media reports” and that “I expect the Trump Administration to take such allegations seriously and inform Congress immediately as to the reliability of these news reports.””If reporting about Russian bounties on US forces is true,” Rep. Liz Cheney, R-Wyo., tweeted Sunday, the White House must explain: 1. Why weren’t the president or vice president briefed? Was the info in the [president’s daily intelligence briefing]? 2. Who did know and when? What has been done in response to protect our forces & hold [Russian President Vladimir] Putin accountable?”Fellow Republican Sen. Jim Inhofe of Oklahoma said that “we need answers.””I have asked the administration to share what it knows, and I expect to know more in the coming days,” he tweeted Monday morning.ABC News’ James Gordon Meek, Ben Siegel Trish Turner, and John Parkinson contributed to this report.Copyright © 2020, ABC Audio. All rights reserved.

Trump impeachment article to be sent to Senate Monday, triggering trial
Indoor dining set to reopen in Chicago, Baltimore as NYC, Los Angeles await answers
US Air Force changes hair requirements for women
Woman who made Bernie Sanders’ viral inauguration mittens says they’re not for sale
“I was just trying to keep warm!” Bernie Sanders laughs on ‘Late Night’ about his meme-ready picture
‘Game of Thrones’ prequel, ‘Tales of Dunk and Egg’, in the works at HBO