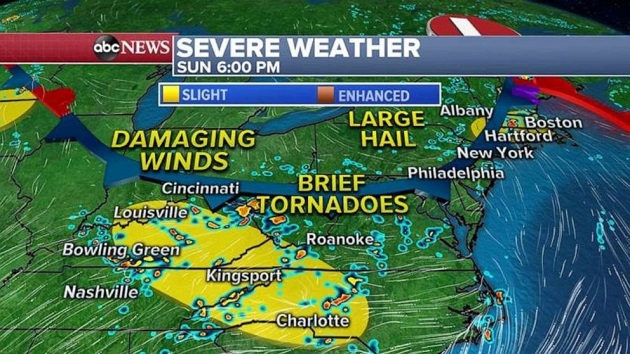 (NEW YORK) — The latest round of severe summer storms brought at least 100 reports of severe weather in various parts of the U.S.

The two main clusters were in parts of the Northeast, where gusty winds, and heavy rain moved through parts of Maryland, Delaware and New Jersey.

A separate cluster of severe storms in the Southeast brought gusty winds to Georgia and South Carolina and even a reported tornado in Alabama.

This morning another line of storms is moving through parts of the Heartland, from eastern Missouri into Southern Illinois and Indiana, and now into part of Kentucky.Radar estimates of two to more than three inches of rain locally and, in some cases, overnight severe summer storms are expected to bring additional rainfall to areas that were hit with heavy rainfall already on Friday night and could produce some flash flooding.

Additionally, the line of storms moving through parts of Kentucky this morning will bring possible flash flooding to the state through much of the day today.

There are several risk areas in the U.S. today for severe storms including the northern high plains and parts of the upper Midwest.

Meanwhile, a line of severe storms will race Southeastward through Kentucky and Tennessee and then into Virginia and the Carolinas.

Meanwhile out West, an ongoing pattern of change is bringing elevated and critical fire danger to a rather large part of the U.S.

Temperatures continue to cool down in most areas, but the cold front is kicking up winds and, along with low relative humidity, there is concern for fire growth and spread from California to Colorado once again today.There has already been a new fire reported overnight south of Salt Lake City.

For most Americans, the only notable impact from the Saharan dust will be some scenic sunsets and sunrises as well has some haze.

For meteorologists, the most notable impact from the Saharan dust is the complete shutdown of the tropical season temporarily. For individuals that have sensitive respiratory concerns, the Saharan dust could also aggravate those existing health issues.

This initial round of Saharan dust is likely to continue to affect the upper levels of the atmosphere trough today and as the dust beings to work its way out of the region over the next few days, it appears another plume of Saharan dust will arrive later this weekend and possibly bring hazier skies to the southern U.S. at that time.

Bob Odenkirk thanks fans for support; ‘Better Call Saul’ star says he’s recovering from “a small heart attack”
Buggles, Benatar and bloopers: Looking back at MTV’s launch 40 years ago
Rebel Wilson says she lost weight to have “a better chance” at having a child
Women lawmakers introduce bill to require statues of Ruth Bader Ginsburg, Sandra Day O’Connor at Capitol
Jay Pharoah and Sinqua Walls joke about their hostility toward Nick Cannon for his role in ‘Love Don’t Cost a Thing’
Check out Adam Driver, Lady Gaga and Jared Leto in the trailer for Ridley Scott’s ‘House of Gucci’