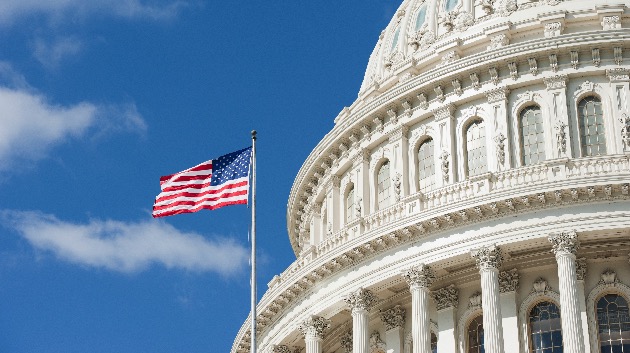 By MARIAM KHAN, ABC News(WASHINGTON) — The House has approved a historic, sweeping policing reform bill on Thursday, setting up a face-off with the Republican Senate where bipartisan talks have stalled.One day after senators blocked a GOP-led policing reform bill from advancing on the Senate floor, Democrats were seeking to apply pressure on Republicans by passing the George Floyd Justice in Policing Act of 2020 in the House.The bill was named in honor of George Floyd, a Black man who was killed in police custody exactly one month ago in Minnesota — his death sparking nationwide calls to address police brutality and racism and prompting weeks of national protests.”Exactly one month ago, George Floyd spoke his final words: ‘I can’t breathe’ — and changed the course of history,” House Speaker Nancy Pelosi said in a press conference on the steps of the Capitol Thursday morning.”Today we have the opportunity and the obligation to ensure that his death and the death of so many others is not in vain,” she said.The House debated the bill later in the day and voted Thursday evening. The final tally was 236-181.Three GOP members broke ranks and voted with Democrats in support of the bill: Reps. Brian Fitzpatrick of Pennsylvania, Fred Upton of Michigan and Will Hurd of Texas.The legislation, spearheaded by Congressional Black Caucus Chairwoman Karen Bass, would ban chokeholds and no-knock warrants in drug cases and reform qualified immunity, making it easier to pursue claims against police officers in civil court.”A profession where you have the power to kill should be a profession where you have highly trained officers who are accountable to the public,” Bass said at the press conference.Other requirements in the House bill include incentives for state attorneys general to investigate local police departments, and providing grants for states to create procedures for investigating police-involved deaths.The legislation seeks to improve transparency by creating a National Police Misconduct Registry, and mandate state and local law enforcement turn over data on use of force broken out by race, gender, disability, religion and age.The bill also aims to address cultural biases in police stations by mandating racial bias training. It would change the standard for evaluating whether use of force was justified. Currently, officers only need to prove that use of force was “reasonable.” The House bill would change the standard so that officers need to prove that use of force is “necessary.”The measure would require federal law enforcement officers wear body cameras.The Senate bill did not go far enough, Democrats have said.Sixty votes were needed to open debate on the Republican policing reform bill authored by Sen. Tim Scott, R-S.C., that sought to offer federal incentives to compel departments to implement best practices, train in de-escalation and end controversial tactics, while penalizing those that do not.But the bill stopped short of implementing federal mandates to curb police use of force and other questionable practices — like chokeholds and carotid holds — limiting the transfer of federal military equipment to localities and creating a national police misconduct database, shortcomings Democrats said made the bill “irrevocably flawed.”Scott, the lone Black Republican in the Senate, slammed Democrats for blocking debate and said the move was “about politics, and a refusal to find a solution.”

One month ago, George Floyd was murdered. One day ago, @SenateDems walked away from police reform. #JUSTICEAct

“We’ll move on. People will forget about it. And you know what’s going to happen? Something bad. And we’ll be right back here talking about what should have been done, what could have been done, why we must act now,” he predicted on the Senate floor.Senate Majority Leader Mitch McConnell left open the possibility of bringing the legislation to the floor again “should progress be made.””The next time another appalling incident makes our nation sick to its stomach with grief and anger yet again, Senate Democrats can explain to the nation why they made sure the Senate did nothing,” McConnell said.Thursday’s vote in the House was expected to fall along party lines, with few — if any — defections on either side. McConnell has made clear that he has no intention of bringing the House bill to the floor of the Senate for a vote without changes — which means passage of any significant police reform is likely dead in the meantime.The House bill has several endorsements from leading corporations, law enforcement, major city mayors and a plethora of celebrities.Leading civil rights and social justice groups such as the NAACP, National Action Network, Urban League and The Leadership Conference on Civil and Human Rights have also thrown their support behind the bill. Copyright © 2020, ABC Audio. All rights reserved.

Watch trailer to Marlon Wayans’ ‘You Know What It Is’; Richard Roundtree & Terri Vaughn join ‘Cherish The Day’; and more
Blinken to meet ‘Havana syndrome’ victims amid ‘growing concerns’ about mysterious incidents
White House fires back at Florida’s GOP governor over handling COVID surge
“The soul of The Valley is on the line”: With teaser, Netflix announces ‘Cobra Kai’ Season 4 to debut in December
Amazon pushes back return-to-office plans to January
Cuomo accuser Lindsey Boylan to file lawsuit against embattled governor: Lawyer