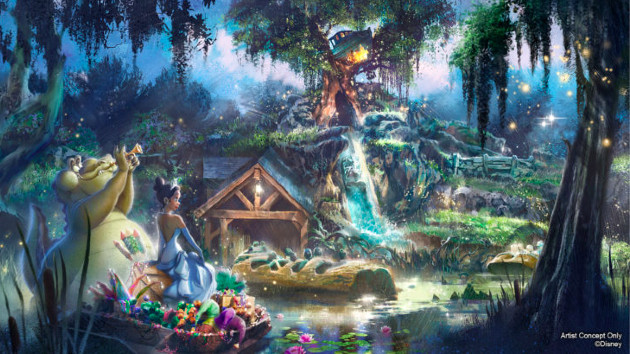 (ORLANDO) — Splash Mountain is getting a timely makeover.The iconic water ride at both Disneyland and Walt Disney World Resort will be re-themed to reflect the story of The Princess and the Frog, the company announced Thursday. The updated ride has been planned since at least last year.”We pick-up this story after the final kiss, and join Princess Tiana and Louis on a musical adventure — featuring some of the powerful music from the film — as they prepare for their first-ever Mardi Gras performance,” the Disney Parks Blog explains.

The attraction was originally based on the 1946 film Song of the South, a film that’s controversial for its use of offensive racial stereotypes and glorification of plantation life.

“We continually evaluate opportunities to enhance and elevate experiences for all our guests,” said Carmen Smith, Creative Development and Inclusive Strategies executive with Walt Disney Imagineering. “It is important that our guests be able to see themselves in the experiences we create. Because we consider ourselves constant learners, we go to great lengths to research and engage cultural advisors and other experts to help guide us along the way.”

Actress Anika Noni Rose, who voiced Princess Tiana, adds in a statement on the Disney Parks Blog, “It is really exciting to know that Princess Tiana’s presence in both Disneyland and Magic Kingdom will finally be fully realized! As passionate as I am about what we created, I know the fans are going to be over the moon. The Imagineers are giving us ‘The Princess and the Frog’ Mardi Gras celebration we’ve been waiting for, and I’m here for it!”Disney hasn’t shared a timeline for the completion of the project, though progress has been delayed due to the park closures.Disney is the parent company of ABC News.

Netflix’s ‘TUDUM’ global fan events provides peeks of returning favorites and new series and films
Legacy and landscape at stake for Pelosi, Biden: The Note
“I got my a** kicked for speaking up”: Katherine Heigl supports union by revisiting controversial comments
Traveling over the holidays? Experts say take advantage of vouchers and lack of change fees
Police investigate ‘suspicious’ death of mother and child at Padres stadium in San Diego
‘Moulin Rouge! The Musical’ ﻿and ﻿’A Christmas Carol’ ﻿win big at 74th annual Tony Awards