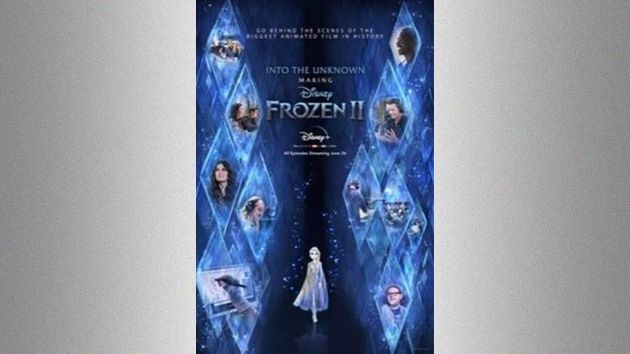 (LOS ANGELES) — If you, like many parents, enjoyed spending your quarantine watching Frozen 2 with the kids on Disney plus and have been left wanting more, great news.  Starting Friday, the streaming service will offer an exclusive docuseries that goes behind-the-scenes of the critically acclaimed movie.

The show Into the Unknown: Making Frozen 2 serves as a back stage pass into the world of creating the highest grossing animated film of all time.

Married couple Kristen Anderson-Lopez and Bobby Lopez, who wrote the songs for both Frozen films, spoke with ABC Audio about what the audience can expect with the new series.

“If you like cooking shows. You’ll love this documentary,” Kristen teased, adding, “Who doesn’t want to know how the magic trick happens?”

One such magic trick moment they say was when two were working on the movie’s Oscar-nominated song “Into the Unknown.”

“They captured the moment we first heard the orchestration for ‘Into the Unknown.’ And it does feel like like a magical moment for everybody,” Anderson-Lopez gushed, with her husband agreeing, “It gives you goose bumps.”

Kristen firmly believes those who watch will gain a greater appreciation of those who worked on making the film.  For example, the docuseries will show the notes process, which is the higher ups periodically telling the crew what’s working and what’s not.

Of course, fans will be wanting more once they binge the entirely of Into the Unknown: Making Frozen 2.  So, when asked if there’s plans on turning Frozen into a trilogy, Kristen played coy.

“Let’s get out of this pandemic. Let’s let’s find a vaccine,” she deflected before holding the third movie hostage. “Give me the vaccine and I’ll write Frozen 3. How about that?”