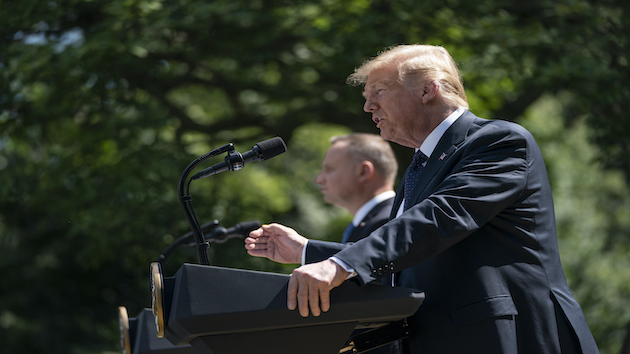 (NEW YORK) — As U.S. coronavirus cases neared their highest levels since April, President Donald Trump played statesman with the first visit of a foreign leader to the White House in the months since the pandemic began.

President Trump on Wednesday hosted Poland’s President Andrzej Duda and began their joint news conference in the White House Rose Garden by touting trade and defense agreements with the country, while slamming other NATO allies as “delinquent,” doubling down on his promise to withdraw U.S. troops from Germany, which he again blamed for not paying its promised share of the alliance’s costs.

“We will be only satisfied when all members are paying their fair share,” Trump said.

Trump applauded the U.S. and Poland for being “true friends and trusted partners for almost 250 years” and said their meeting will “reaffirm the vital alliance” between them.

Duda’s visit to the White House also prompts a question about whether the U.S. will increase its military presence in Poland as Trump draws down troop levels in nearby Germany, an idea Duda seemed to welcome, saying: “In our belief it is deeply justified to ensure U.S. troops are left in Europe.”

Trump said Poland was an option for where to leave them, and Duda said his country is “ready” to host.

“They want to take away a lot of the strength from our police and from law enforcement generally, and we can’t live with that we can live with that,” he added.

He also teased an executive order he says he’s signing “before the end of the week” that he says will make it easier to prosecute protesters who attempt to take down statues — with 10 years of jail time.

He said the FBI is currently investigating “hundreds of people throughout the country for what they’ve done to monuments, statues and even buildings.”

While Trump did not bring up the coronavirus in his opening remarks, notably while the country’s cases reached new heights, Duda led by addressing the global pandemic.

He said, through a translator, public health officials in his country hope to work with those in U.S. as scientists across the world develop therapies and vaccines.

“We will be getting Poland involved, both in terms of helping but also in terms of taking care of the Polish people once we have the vaccine, but I think we’re gonna have it very soon,” Trump later said.

The news conference comes only hours after, in a shocking reversal, a federal appeals court ordered a lower court to dismiss the case against Trump’s first national security adviser, Michael Flynn, as requested by the Justice Department.

During an earlier photo op of his meeting with Duda in the Oval Office, President Trump said he was “very happy about General Flynn.”

“He was treated very, very horribly by a group of very bad people,” Trump said. “And I think you will see things are going to start to come out. But what happened to General Flynn should never happen again in our country. He was persecuted and many other people were persecuted.”

“He has been exonerated, and I want to congratulate him,” Trump added.