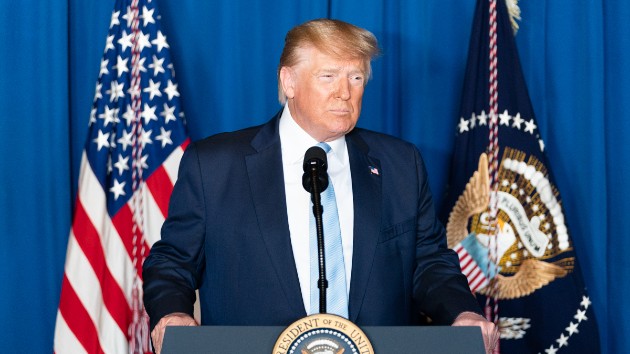 By JOHN SANTUCCI and AARON KATERSKY, ABC News(WASHINGTON) — The family of President Donald Trump is seeking a temporary restraining order against Mary Trump, a niece of the president who is writing a book about her famous uncle and family, sources familiar with the matter confirmed to ABC News.The president’s younger brother, Robert S. Trump, filed the complaint in Queens County Surrogate’s Court seeking to stop the publication of Too Much and Never Enough: How My Family Created the World’s Most Dangerous Man which is slated to be published by Simon & Schuster on July 28. The filing was made in the same court where the estate of the president’s late father, Fred Trump Sr., was settled.The news was first reported by The New York Times.Mary Trump’s attorney, Ted Boutrous, told ABC News in a statement that “President Trump and his siblings are seeking to suppress a book that will discuss matters of utmost public importance. They are pursuing this unlawful prior restraint because they do not want the American people to know the truth. The courts will not tolerate this brazen effort to squelch speech in violation of the First Amendment.”Simon & Schuster, the publisher of the forthcoming book, also defended it.“As the plaintiff and his attorney well know, the courts take a dim view of prior restraint, and this attempt to block publication will meet the same fate as those that have gone before,” the publisher said in a statement to ABC News. “In Too Much and Never Enough: How My Family Created the World’s Most Dangerous Man, Mary Trump has written a compelling personal story of worldwide significance, and we look forward to helping her tell her story.”According to a description of Mary Trump’s book on Amazon, “she describes a nightmare of traumas, destructive relationships, and a tragic combination of neglect and abuse. She explains how specific events and general family patterns created the damaged man who currently occupies the Oval Office.”An attorney for Robert Trump did not respond to a request for comment from ABC News. The Trump Organization declined to comment.Copyright © 2020, ABC Audio. All rights reserved.