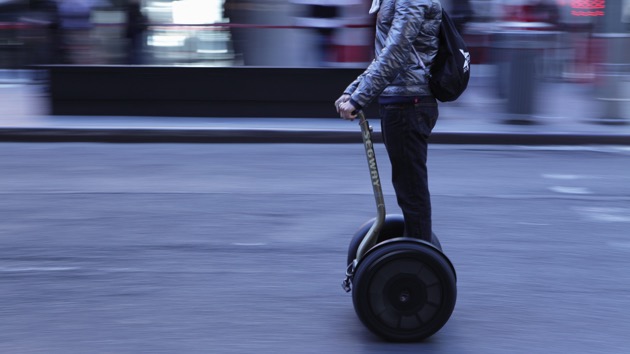 By CATHERINE THORBECKE, ABC News(BEDFORD, N.H.) — After nearly two decades on the market, Segway announced it is ending production of its namesake personal vehicle, the Segway Personal Transporter.While the Segway has gained popularity in recent years among law enforcement, private security firms and tour groups, the personal transporter has courted controversy, faced recalls, and been involved in a high-profile death.In 2010, British entrepreneur James Heselden, at the time the owner of the company, died in a Segway-related mishap after falling from a 30-foot cliff while riding his Segway.While the personal transporter had cemented itself into an iconic part of 2000’s culture, the Segway PT accounted for less than 1.5% of the company’s revenue last year, according to Segway President Judy Cai.Cai noted that the company has seen an “over-saturation” of the market for Segway PT’s, and that as they are “an extremely durable vehicle,” many that are still on the road are 10 years old or even older.”In light of these conditions, and after thorough evaluation, we have made the difficult decision to retire the Segway PT, effective July 15,” she added. “This decision was not made lightly, and while the current global pandemic did impact sales and production, it was not a deciding factor in our decision.”As a result of production ending, 21 people working in the company’s Bedford, New Hampshire, facilities will be laid off in July and receive a severance package, Cai said. Another 12 workers will be kept on for two months to one year, according to Cai.”Given our decades-long history, we recognize that this decision may come as a disappointment to our strong and loyal following among private owners, who view the Segway as one of the more innovative creations of the early 21st century,” Cai said.  Cai said going forward, the company will continue its profitable scooter production, and focus on bringing other “reputable, high-quality products to market.” Copyright © 2020, ABC Audio. All rights reserved.

Washington state deputy shot and killed in the line of duty
Lack of diversity in higher learning can be a problem for diverse student bodies
From counterculture to competition, skateboarding makes its way to Olympics
Whoopi Goldberg joins film on Emmet Till’s mother; Marla Gibbs & Jackée Harry to reunite on ‘Day of Our Lives’ & more
Chrissy Teigen thanks fans for sending the “most amazing” condolences after loss of baby Jack
Stanford University reports seven breakthrough cases of COVID-19 among fully vaccinated students