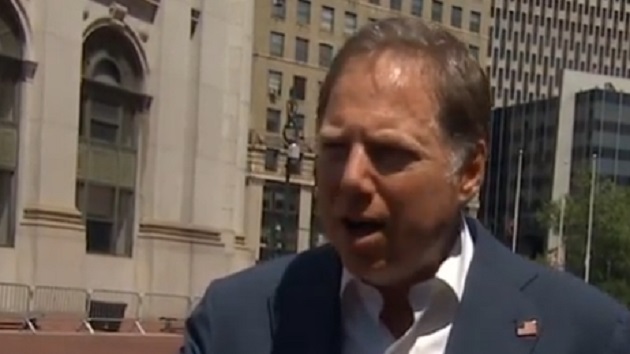 BY: ALEXANDER MALLIN and LUKE BARR

(WASHINGTON) — Two Justice Department whistleblowers appeared before the House Judiciary Committee Wednesday to outline a series of allegations regarding what they described as political meddling in department affairs under President Donald Trump and Attorney General William Barr.

Aaron Zelinsky, a department attorney who withdrew from the prosecution of Trump-ally Roger Stone after Barr intervened in the sentencing process, and John Elias, a former acting chief of staff in the antitrust division under Assistant Attorney General Makan Delrahim, both testified that they felt department leadership had wrongfully intervened in typically-sensitive law enforcement matters purely to benefit Trump’s interests.

Zelinsky specifically accused former U.S. attorney Timothy Shea of folding to demands from department leadership as they deliberated over a sentencing recommendation for Stone, saying Shea “was giving Stone a break because he was afraid of the president of the United States.”

“What I saw was that Roger Stone was being treated differently from every other defendant,” said Zelinsky, who resigned from the Stone prosecution after Barr stepped in this past February to reverse their original sentencing recommendation. “He received breaks that are in my experience, unheard of. And what I heard repeatedly, was that this leniency was happening because of Stone’s relationship to the president.”

Zelinsky described his extraordinary decision to speak out publicly against the department while still serving there as an attorney as “deeply painful.”

“We are immensely proud of what we do and we are proud to serve in the Department of Justice, and we are proud that we prosecute without fear or favor,” Zelinsky said. “To describe an abdication of responsibility like this and this sort of contradiction of all the reasons we have taken these jobs is deeply painful to me.”

On Tuesday night, Justice Department spokesperson Kerri Kupec issued a statement defending Barr’s intervention in the sentencing process, saying the attorney general had never discussed the matter with Trump or anyone else in the White House.

Kupec additionally noted that Zelinsky has not detailed any conversations he had directly with Barr or Shea.

“Mr. Zelinksy’s allegations concerning the U.S. Attorney’s motivation are based on his own interpretation of events and hearsay (at best), not first-hand knowledge,” Kupec said.

At the start of the hearing, Kupec tweeted saying that Barr had accepted an invitation to appear in front of the committee for an oversight hearing on July 28. House Democrats were earlier preparing to issue a subpoena for Barr’s testimony on July 2 after he had repeatedly delayed his appearance citing the COVID-19 pandemic.

House Judiciary Chairman Jerry Nadler began the hearing by pointing to the weekend firing of former U.S. Attorney for the Southern District of New York Geoffrey Berman, which he described as part of a broader pattern of Barr’s actions designed to benefit the president.

“The effort to remove Mr. Berman is part of a clear and dangerous pattern of conduct that began when Mr. Barr took office, and continues to this day,” Nadler said. “Mr. Barr’s actions make clear that in his Department of Justice, the president’s allies get special treatment. The president’s enemies, real and imagined, are targeted for extra scrutiny and the needs of the American people and the needs of justice are generally ignored.”

The hearing concluded at about 4:30 p.m. Wednesday.