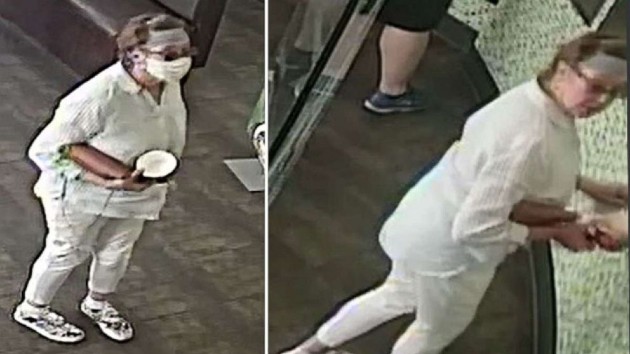 By JON HAWORTH, ABC News(SAN JOSE, Calif.) — A woman who deliberately coughed on a baby in a stroller at a restaurant is being hunted by police.The incident occurred in the afternoon of June 12 at approximately 5:25 p.m. at a Yogurtland establishment in San Jose, California, when the suspect, a woman described as a white female in her 60s, was standing in line in front of a mother and her 1-year-old child, who was in a stroller, when she reportedly became upset with the mother for not maintaining proper social distancing.“The preliminary investigation revealed the suspect was upset the female was not maintaining proper social distancing, so the suspect removed her face mask, got close to the baby’s face, and coughed 2-3 times,” said Sgt. Enrique Garcia in a press release from the San Jose Police Department.The mother involved believes that the incident was race related.”I believe this woman may be racist because the family in front of her is white. Me and my grandma are Hispanic and she started telling me about my distance and harassing me and my son once I started speaking Spanish to my grandma,” Mireya Mora, the mother of the 1-year-old boy who was coughed on, told ABC News’ San Francisco station KGO-TV.Mora said that her son had a slight fever after the coughing incident but that he is doing okay and she is hopeful that he doesn’t contract coronavirus.“If he were to get sick, it’s just, I can’t even imagine,” Mora said.The San Jose Police Department are asking the public for help identifying the female suspect involved in the case.Authorities have described the suspect as a white female in her 60s, medium build, wearing a gray bandana, glasses, long sleeve shirt with gray vertical lines, white dress pants and patterned tennis shoes.Said Mora: “Coughing on someone’s face. She did it on purpose it’s not like she did it on accident, oh cough, cough – no she purposely coughed on my son’s face … It happened so quick I was in shock. She got close, she took off her mask, and she coughed three times super hard on my son’s face.”But, as of now, the suspect remains unidentified and on the run and anybody with information is asked to contact the San Jose Police Department’s Assaults Unit.Copyright © 2020, ABC Audio. All rights reserved.

Lucy Lawless reunites with ‘Xena’ co-star Renee O’Connor in season two of Acorn TV’s ‘My Life Is Murder’
Injured in a video game? Attorney Bryan Breynolds, no relation to ‘Free Guy’ star Ryan Reynolds, is here for you
Arizona mom urges masks in classrooms after her kindergartner contracts COVID-19
DOJ opening investigation into Phoenix Police Department, city of Phoenix
“The soul of The Valley is on the line”: With teaser, Netflix announces ‘Cobra Kai’ Season 4 to debut in December
‘Star Wars: The Bad Batch’ gets second season on Disney+