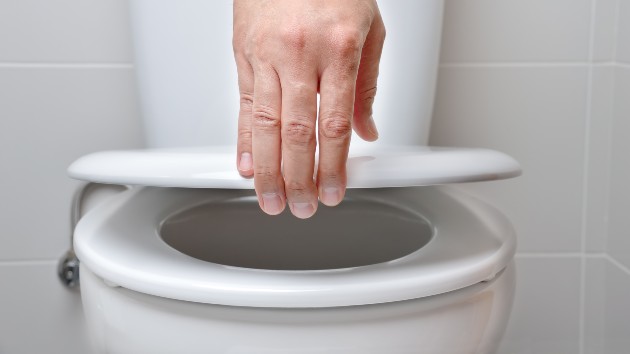 By ABC News(NEW YORK) — Closing the toilet lid when you flush could prevent the spread of the coronavirus.That’s according to researchers in China who used a computer simulation to show how a flushing toilet can create a cloud of virus-containing aerosol droplets, allowing the spread of viruses to spread indoors.Although the researchers didn’t conduct an in-person experiment using real coronavirus particles, they say their simulation offers new evidence that it’s probably smart to close that toilet seat before you flush.COVID-19 is largely a respiratory virus, meaning it’s typically found in the lungs. However, virus particles have also been detected in feces. And it’s easier than you might think for viral particles to spread from feces into your mouth, typically by accidentally ingesting it from contaminated food or water. Other viruses, such as hepatitis A, norovirus and polio, can be spread this way too.The recent study, published in Physics of Fluids, a peer-reviewed scientific journal, showed that 40% to 60% of the total number of potentially virus-containing aerosol droplets can rise above the toilet seat during flushing. The highest reached up to about three feet from the ground.The researchers recommend putting the toilet lid down before flushing to prevent potential spread of COVID-19. They also recommend cleaning the toilet seat before use and washing hands carefully after flushing.However, other experts cautioned that worrying about catching COVID-19 from a toilet is probably misplaced because there are no documented cases of anyone actually becoming infected in this way.“Transmission of infectious organisms from toilet plume is a phenomenon that comes up from time to time. While there haven’t been any cases linked to this type of transmission, to my knowledge, it is biologically possible but probably low risk,” says Dr. Amesh Adajl, an infectious disease specialist at Johns Hopkins School of Public Health in Baltimore, Maryland.Back in April 2020, a different study conducted at two hospitals in Wuhan found higher levels of the virus particles in patients’ bathrooms than in their hospital rooms.“We know this occurs from older studies [prior to COVID-19], which show that if you place bacteria or viruses into a toilet bowl and flush the toilet, you can detect these infections around the bathroom,” says ABC News Contributor Dr. Todd Ellerin.”Other studies have shown that COVID-19 can remain suspended in the air for three hours after an infected patient has left the room,” Ellerin said, emphasizing that these studies did not prove that the virus particles found in the air were capable of infecting anyone.The question is, should we adopt this practice, closing the lid when flushing the toilet?“I do think it is prudent to close the lid when you flush because it does expel particles that could land on common touch surfaces,” said Adajl.Becoming infected by inhaling COVID-19 viral particles from the toilet is likely “uncommon,” said Adajl, “and not something that I personally worry too much about.”However, experts stressed the importance of tried-and-true methods of preventing COVID-19 infection, including frequent hand washing and wearing face coverings — especially in public bathrooms.“It is also important to wash your hands after being in a public restroom and refrain from touching your face,” said Adajl.

And if you have a higher risk of COVID-19, Ellerin said it’s a good idea to wear a mask in a public restroom, since many are poorly ventilated. Copyright © 2020, ABC Audio. All rights reserved.

Unvaccinated patient in hospital pleads for others to get vaccine: ‘I want to help as many people as I can’
Fauci: If community spread doesn’t get under control, US ‘may sooner or later get another variant’
Leaders across the country in disagreement over whether to require COVID-19 vaccine passports
FAA urges airports to help stop alcohol ‘to go’ amid unruly passenger spike
1-in-100-year floods happening so often, the term may change
Millions of Americans were struggling to find affordable housing. Then the pandemic hit.