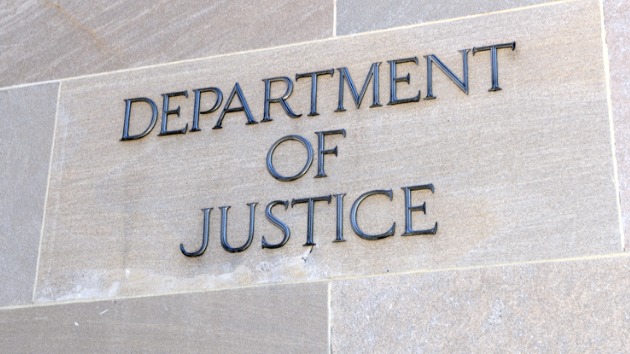 By ALEXANDER MALLIN and LUKE BARR, ABC NEWS(WASHINGTON) — Two current Justice Department officials are set to appear before the House Judiciary Committee to detail a series of allegations regarding what Democrats describe as the “unprecedented politicization” of the department under President Donald Trump and Attorney General William Barr.Aaron Zelinksy, a former prosecutor in special counsel Robert Mueller’s office who now serves as an assistant U.S. attorney in Maryland, and Jonathan Elias, a former acting chief of staff in the DOJ’s antitrust division, will both appear before the panel Wednesday.Zelinksy was one of four attorneys who resigned from the Justice Department’s prosecution of Trump confidant Roger Stone after Barr took the extraordinary and controversial step of intervening in the sentencing process.In testimony released on Tuesday, Zelinsky will say that the acting U.S. attorney for D.C. at the time, Timothy Shea, told him he was “afraid of the president” and that’s why Stone was getting favorable treatment. Shea has since left the office and is currently acting Drug Enforcement Agency administrator.”What I heard — repeatedly — was that Roger Stone was being treated differently from any other defendant because of his relationship to the president. I was told that the acting U.S. Attorney for the District of Columbia, Timothy Shea, was receiving heavy pressure from the highest levels of the Department of Justice to cut Stone a break, and that the U.S. Attorney’s sentencing instructions to us were based on political considerations,” according to Zelinsky’s prepared statement. “I was also told that the acting U.S. Attorney was giving Stone such unprecedentedly favorable treatment because he was ‘afraid of the president.’ That explanation was deeply unsettling. “Zelinsky says in the opening statement that he saw the favorable treatment of Stone “with (his) own eyes.”Stone was found guilty on five counts of lying to Congress, one count of witness tampering and one count of obstruction of a proceeding. Zelinsky and the other prosecutors in the D.C. U.S. Attorney’s office had recommended Stone serve between seven and nine years in prison based on federal sentencing guidelines.But Barr, following tweets from Trump describing the recommendation as a “miscarriage of justice,” stepped in hours later to reverse the team’s recommendation — though in an ABC News interview he denied he was acting at the president’s behest and said Trump’s tweets were making it “impossible” to do his job.Stone was eventually sentenced by U.S. District Judge Amy Berman Jackson to serve more than three years in prison and he is scheduled to report to a federal penitentiary in Georgia next week.While Elias’ name has not yet been similarly elevated in association with major controversies involving Trump or Barr, he previously served as acting chief of staff to Makan Delrahim, the assistant attorney general leading the department’s antitrust division.Elias has worked in the antitrust division since the Bush administration and held positions as a career official ranging from a trial attorney to the counsel and chief of staff for Bill Baer, who served in Delrahim’s role during the second term of the Obama administration.”John is a smart and honest career civil servant, a lawyer with integrity who has faithfully served under two Republican and one Democratic presidents,” Baer said in a statement to ABC News. “He’s the guy you want in your foxhole when the shooting starts.”As the New York Times first reported, Elias’ tenure in the department coincided with the antitrust division’s controversial move to investigate a deal between four auto companies and the State of California regarding fuel efficiency standards, which Trump publicly attacked on Twitter. The probe was dropped earlier this year, a Justice Department official said.Another person, who has been in touch with Elias in recent days and spoke to ABC News on the condition of anonymity, described Elias as “a straight arrow who doesn’t seek the limelight,” which is why they said his decision to testify was so extraordinary.”He’s obviously doing this because he believes that there has been inappropriate conduct within the department, within the division,” the person said. “It will come down to what he has to say and what he can testify to. It’s highly unusual for there to be credible accusations of political interference in anti-trust law enforcement.A spokesperson for the DOJ’s civil division did not immediately respond to a request for comment from ABC News.The testimony comes as Barr has been under increasing fire for his handling of matters of potential interest to Trump, including the recent firing of Geoffery Berman, the former U.S. Attorney for the Southern District of New York.Late last Friday night, Barr announced via press release that Berman had decided to step aside from the position to make room for Trump’s nominee Jay Clayton, the outgoing Securities and Exchange Commission commissioner. But Berman issued a statement roughly an hour later directly contradicting Barr, saying he had no intention of stepping down.On Saturday, Barr issued a statement announcing he asked the president to fire Berman — effective immediately — in light of his public rebuke.”Unfortunately, with your statement of last night, you have chosen public spectacle over public service,” Barr said.Berman agreed to depart the office, citing Barr’s adherence to the regular order of succession in the office in assigning Berman’s deputy, Audrey Strauss, as acting U.S. Attorney.Under Berman, the office had prosecuted Trump’s former personal attorney Michael Cohen and, according to sources. continues to actively investigate his personal attorney, Rudy Giuliani.The episode has sparked a new effort by House Democrats to subpoena Barr for his public testimony before the Judiciary Committee as soon as next week. House Judiciary chairman Jerry Nadler’s panel has unsuccessfully sought Barr’s testimony since March for their investigation into the alleged politicization of the DOJ.A Justice Department spokeswoman declined to comment on the new effort.ABC’s Katherine Faulders and Benjamin Siegel contributed reporting to this story.Copyright © 2020, ABC Audio. All rights reserved.