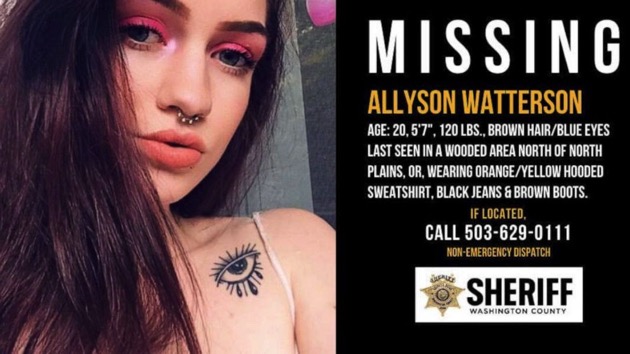 By EMILY SHAPIRO, ABC News(NORTH PLAINS, Ore.) — Six months after a young woman who was last seen with her boyfriend disappeared, Oregon authorities say her remains may have been recovered.Remains believed to belong to 20-year-old Allyson Watterson were found near North Plains, Oregon, on Saturday, the Washington County Sheriff’s Office said.The discovery was made just before 5 p.m. while the property owner was clearing brush, the sheriff’s office said.”Based on the location of the remains and evidence found at the scene, detectives suspect the remains are those of Allyson Watterson,” the sheriff’s office said in a statement on Saturday.Watterson went missing in December. She was last seen with her boyfriend, who is considered a person of interest in her disappearance, Washington County Sheriff’s Sgt. Danny DiPietro told ABC News on Monday.DiPietro declined to say if authorities suspect foul play. No charges have been filed in the case.The boyfriend had an active warrant in December and he is now serving a sentence for a conviction on an unrelated charge, DiPietro said.Watterson’s relatives has been notified of the possible recovery of her remains and they are asking for privacy, according to the sheriff’s office.The investigation is ongoing, the sheriff’s office said. Copyright © 2020, ABC Audio. All rights reserved.