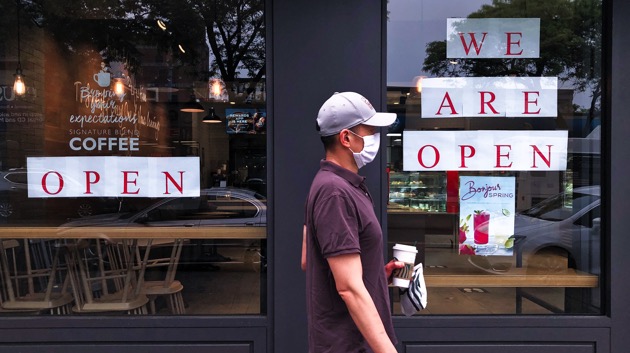 (NEW YORK) — After spending almost all of spring in a COVID-19 pause, the Big Apple kicked off the first week of summer with the next step in its return to normal.New York officially began phase 2 of its reopening, allowing restaurants to conduct outdoor dining, and salons and barbershops, offices and other businesses to commence their operations with reduced capacity and strict social distancing guidelines. Mayor Bill de Blasio said an estimated 300,000 employees could return to work.”Phase 2 is really a giant step for this city. This is where most of our economy is,” the mayor said during a news conference Monday morning.Among the major retailers that allowed customers to return to their shelves on Monday was Macy’s. The department store said all of its New York locations, including its flagship Herald Square store, reopened for in-store and pick-up shopping.The store’s representatives said they are taking strict measures, such as deep cleaning and social-distancing markers on the floor, to keep everyone safe.”Following Centers for Disease Control [CDC], as well as state and local guidance, Macy’s stores in the NY Metro area are open to the public from 11 a.m. to 7 p.m.,” Macy’s said in a statement.Playgrounds were also reopened to families, but dog-runs were still closed, according to the mayor. In playgrounds in Brooklyn, parents and their children were back in swings, climbing jungle gyms and enjoying a cool-down near the water sprinklers.New York City has been the epicenter of the pandemic, with 209,313 confirmed coronavirus cases and 17,596 related deaths so far, according to the city’s health department.The mayor said mitigation efforts have proven successful, as the number of new daily cases has dropped to an average of under 300 a day over the last two weeks. During its peak, the city saw an average of over 4,000 new cases daily, according to data from the Health Department.The number of New Yorkers testing positive for the virus is around 1% with thousands of tests being administered daily, de Blasio said.The mayor said that since phase 1, subway ridership has jumped as more people have gone back to work. Between June 4 and June 18, ridership was up by 28%, according to de Blasio.”Some will do it immediately, some will take their time,” he said of returning to work. “But what we know is, every passing day everyone is saying, ‘Hey this is working.’”Copyright © 2020, ABC Audio. All rights reserved.