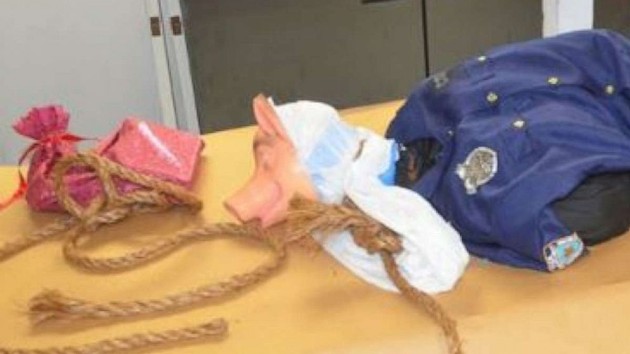 By JON HAWORTH, ABC News (JACKSONVILLE, Fla.) — A mock lynching of a mannequin wearing a police officer’s uniform and a pig mask has been found hanging over a highway.The scene was discovered early on the morning of June 20 when emergency responders were dispatched at approximately 6 a.m. to investigate a possible suicide on an overpass of I-95 in Jacksonville, Florida. When authorities arrived, however, they discovered that the scene did not involve a suicide but instead was a deliberate mock lynching of a mannequin wearing a pig mask and a police officer’s uniform.”The incident that occurred this morning depicting the mock lynching of a mannequin dressed in what appeared to be the uniform of a law enforcement officer is extremely disturbing,” Jacksonville Sheriff Mike Williams in a statement. “Both the tactics and props used were a deliberate attempt to exasperate an anti-police sentiment and drive a divide in our community.”The mayor of Jacksonville issued a statement calling the incident “appalling and disturbing.”“We are working to come together & invoke change & growth in our community,” said Mayor Lenny Curry in a Twitter post. “We won’t let an appalling & disturbing act like this derail our progress. I won’t tolerate actions like this so blatantly meant to intimidate our police nor will I stand for it against any citizen.”The mannequin was removed and authorities have launched an investigation.Said Jacksonville Sheriff Mike Williams: “This incident was carried out by people wanting to undermine our dedicated efforts to keep our city safe. Too many good citizens are working with us to keep our community safe through active partnerships, and frank conversations about the challenges we all face. This type of act will not be tolerated by our agency or our community, and we will work together to hold those responsible accountable.”Steve Zona, president of the Jacksonville Fraternal Order of Police echoed Sheriff Williams’ sentiments.“The hate displayed in [this incident] is not representative of our community. It is representative of someone with a small mind and whose only goal is to cause division. We are thankful for the support we have here in Jacksonville and we will not allow the actions of one person, or a few, to effect our commitment to serve,” Zona said.Copyright © 2020, ABC Audio. All rights reserved.

Arkansas Gov. Asa Hutchinson seeks to reverse mask ban he signed, making him a GOP outlier
S-V-Ooh: ‘Law & Order’ vet Chris Meloni jokes about his derrière sparking a “cultural movement”
26-year-old sheriff’s deputy killed in ambush shooting: Louisville police
Leaders across the country in disagreement over whether to require COVID-19 vaccine passports
What is a HIPAA violation?
Millions of Americans were struggling to find affordable housing. Then the pandemic hit.