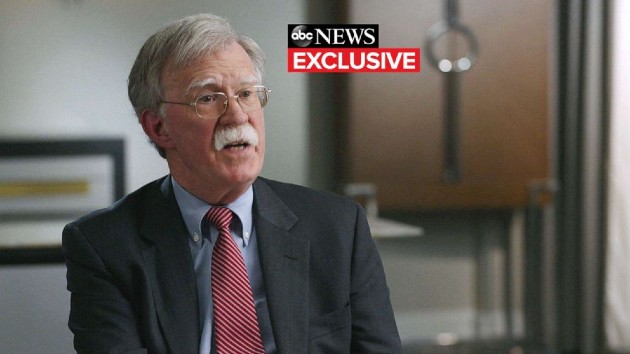 By CONOR FINNEGAN, ABC News(WASHINGTON) — President Donald Trump’s longest-serving national security adviser John Bolton condemned his presidency as dangerously damaging to the United States and argued the 2020 election is the last “guardrail” to protect the country from him.In an exclusive interview with ABC News, Bolton offered a brutal indictment of his former boss, saying, “I hope (history) will remember him as a one-term president who didn’t plunge the country irretrievably into a downward spiral we can’t recall from. We can get over one term — I have absolute confidence, even if it’s not the miracle of a conservative Republican being elected in November. Two terms, I’m more troubled about.” In the interview with ABC News Chief Global Affairs Correspondent Martha Raddatz and in his new book, The Room Where It Happened, Bolton paints Trump as “stunningly uninformed,” making “erratic” and “irrational” decisions, unable to separate his personal and political interests from the country’s, and marked and manipulated by foreign adversaries.”I don’t think he’s a conservative Republican. I’m not going to vote for him in November — certainly not going to vote for Joe Biden either. I’m going to figure out a conservative Republican to vote in,” he told Raddatz.

[ CLICK HERE TO READ THE COMPLETE TRANSCRIPT OF BOLTON’S INTERVIEW ]

What Bolton says to criticsSince excerpts of the book — out June 23 — leaked, Bolton has faced a tsunami of criticism both from Trump and his allies, for betraying his trust, and from Trump’s critics, for coming out against the president now when he refused to testify before the House impeachment hearings and stayed silent with Trump on trial in the Senate.Trump himself has blasted Bolton as a “wacko” and “liar,” while accusing him of revealing classified information and attacking him personally: “Everybody in the White House hated John Bolton.” Those comments contradict what Trump said just months ago after Bolton left the administration, telling reporters in November, “I like John Bolton. I always got along with him.”In his interview, Bolton predicted Trump’s response would be “volcanic,” countering, “It’s typical of the Trump administration that when faced with criticism, they don’t deal with the substance of the criticism, they attack the person, which I fully expect and doesn’t surprise me.””The president isn’t worried about foreign governments reading this book. He’s worried about the American people reading this book,” Bolton added, saying he was “very conscious” to avoid including classified information, but, “The people of the country need to hear the reality.”A federal judge ruled Saturday that while Bolton’s book can be released, publishing it without formal clearance from the White House “has exposed his country to harm and himself to civil (and potentially criminal) liability.”Pressed by Raddatz on his own support for Trump, Bolton called it a “mistake.””I overrated the chances to make this into a coherent, rational, systematic, decision-making process, to advance American interests. … That turned out not to be right,” he said, adding that he stayed for 17 months “because the stakes are so high that I thought I could continue to make a contribution.”

COVID-19 vaccinations up 14% in past week, White House says
Bada Bing! ‘Monopoly: The Sopranos Edition’ is here
‘Modern Family”s Ariel Winter hopes for “freedom” for Britney, “consequences” for people “who have kept her away”
How sustainable is it to rent clothing? Experts and top brands weigh in
New York Jets assistant coach Greg Knapp dies after being struck by vehicle
Zendaya is the woman of Timothee Chalamet’s dreams in action-packed trailer for ‘Dune’