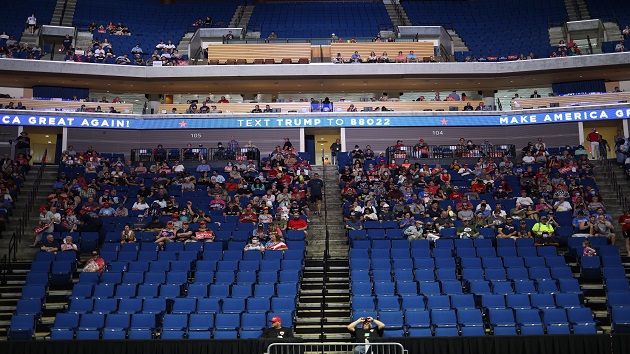 BY: WILL STEAKIN AND IVAN PEREIRA, ABC NEWS

Trump took the stage to a cheering crowd and talked about a wide variety of recent issues.He criticized governors and local leaders for their handling of the Black Lives Matter protests that took place after George Floyd was killed. He particularly singled out Seattle, where protesters took over a police precinct and a section of the city.Trump boasted about his use of the National Guard troops to quell the protests in some cities.”I have an offer out, any time you want, we will come in and straighten it out in one hour or less. I may be wrong, but it’s probably better for us to just watch this disaster,” he said to a cheering crowd.He also criticized Democratic leaders for not talking about the coronavirus dangers during the protests.”They never talk about COVID. They don’t talk about — when you see 25,000 people walking down Fifth Avenue, or walking down a street of a Democrat-run city — you never hear them saying they are not wearing their masks as they are breaking windows and running in.”Trump brought up the virus’s origins in China, much to the amusement of the crowd.”COVID-19. That name gets further and further away from China as opposed to calling it the Chinese virus,” he said to a loud applause.He also later referred to it as the “kung flu.”8:09 p.m. Pence promises more conservative Supreme Court justices if Trump is reelected

Vice President Mike Pence took the stage and talked to the crowd before introducing the president.While talking about Trump’s plans for his second term and taking shots at his predecessor, former Vice President Joe Biden, Pence talked about Trump’s appointment of federal judges. Pence touched on this week’s Supreme Court rulings that upheld protections for transgender Americans and DACA recipients and pledged that Trump would appoint more conservatives to the bench.”We learned this past week, we need more conservative justices on the Supreme Court of the United States,” Pence said.Trump also mentioned the Supreme Court at the top of his speech and said he hoped to name more judges.The crowds were sparse in the arena, with many of the seats in the upper levels empty.7:55 p.m. Terence Crutcher’s sister declined meeting with Pence: Source

A source close to activist Tiffany Crutcher, the brother of Terence Crutcher, a Black man who was killed by Oklahoma police in 2016, told ABC News she declined an invitation to speak with Vice President Mike Pence before the rally.“Tiffany did not want to be used as a photo-op when so little progress has been made on police reform and civil rights,” the source said.Betty Jo Shelby, the officer who shot Crutcher, was charged with manslaughter, but found not guilty.7:29 p.m. Trump cancels outdoor remarks as small crowd gathers near stage

In a last-second change, the president’s campaign staff announced he was canceling a speech to the overflow crowd outside the arena due to lower-than-expected turnout.A stage was already set up outside the BOK Center, but there were few people near it around 7 p.m.Tim Murtaugh, a spokesman for the campaign, told ABC News the smaller-than-expected turnout was caused by protesters and the media, however, there have been few reports of massive protests outside the arena.7:14 p.m.: Precautions in place as rallygoers show up at BOK Center

Rallygoers were given written warnings about COVID-19 and staff members were in place to ensure that they were as safe as possible before entering the BOK Center.Around the perimeter, health care workers in personal protective equipment were on hand to check the temperatures of the attendees with hand scanners and kiosk temperature scanners.Posters were also put up warning the attendees of their risks of catching the virus and by entering, they wouldn’t hold the president or his campaign staff liable if they got sick.There were stations filled with face masks and hand sanitizer for the attendees.Experts concerned over coronavirus spread

Dr. Anthony Fauci, the nation’s top infectious-disease expert and leading member on the president’s coronavirus task force, said he would not attend Saturday’s event and told ABC News’ that attending a political rally or a protest right now is still “a danger” and “risky.”Tulsa officials in the lead up to Saturday’s massive campaign event, which is expected to draw around 100,000 people to the area, even recommended to the president that he postpone the event out of fear the gathered wouldn’t be safe as data shows a spike in cases.”I recommend it be postponed until it’s safer, until the data tells that is not as great of a concern to have people indoors, in enclosed spaces with a threat of a COVID-19 transmission,” Tulsa Health Department director Dr. Bruce Dart said Thursday. “That is what I personally would like to see happen. The virus is here. So let’s focus on staying safe while it’s here.”But in response, the Trump campaign said it’s still full-steam ahead, with plans in place to check temperatures at the doors, hand out hand sanitizer and masks, however wearing one won’t be mandatory.And rather than return to campaign events amid a pandemic that’s killed over 117,000 Americans with a more scaled-down approach, the president’s campaign is instead relaunching rallies on a scale even bigger than before the coronavirus hit—with Trump planning on delivering two speeches on Saturday, one to an overflow crowd packed together outside and another to thousands inside the BOK Center.“Look, I think Americans know best what’s best for them and for their families and of course taking those safe and responsible measures. If they will be attending the rally,” Trump campaign Senior Advisor Mercedes Shlapp told ABC NewsLive Primetime anchor Linsey Davis.And while White House press secretary Kayleigh McCenny said at a White House press briefing on Friday that she won’t be wearing a mask when she attends Saturday’s rally, Trump campaign manager Brad Parscale said he has other plans when asked.“Yes. Yes, I will probably be wearing a mask,” Parscale said in an interview with Fox News.Saturday’s rally also comes as the nation continues to see massive protests and calls for racial justice continue into the Juneteenth holiday weekend, a day that celebrates the end of slavery. The president sparked controversy after initially announcing his return rally would take place on Juneteenth, but following widespread condemnation even from some within his own party, Trump took the rare step and changed the date.However, the president said he wasn’t aware of the holiday when the campaign initially landed on the date, and also tried to take credit for populating the holiday that millions of black Americans celebrate each year, falsely telling the Wall Street Journal that “nobody” knew of Juneteenth until him and took credit for making the holiday “very famous.”Amid threats of protests, the city of Tulsa put into place a curfew late Thursday night that would have lasted Friday and Saturday, but Tulsa Mayor G.T. Bynum rescinded the curfew less than 24 hours later.Before the curfew was removed, a Trump adviser scoffed at the potential rally roadblock saying, “He’s the president and he’s going to do what he wants.”Moments later the president tweeted: “I just spoke to the highly respected Mayor of Tulsa, G.T. Bynum, who informed me there will be no curfew tonight or tomorrow for our many supporters attending the #MAGA Rally.”“Enjoy yourselves – thank you to Mayor Bynum!”Copyright © 2020, ABC Audio. All rights reserved.