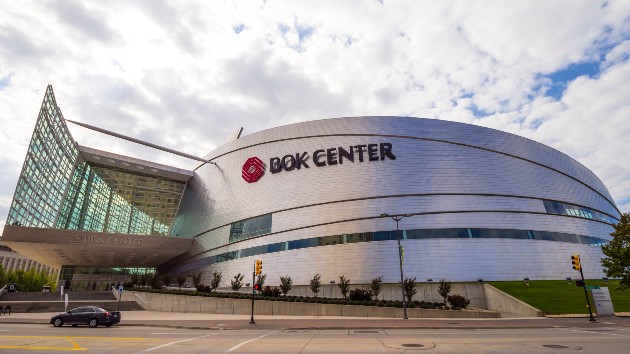 By ELLA TORRES, ABC News(TULSA, Okla.) — Tulsa, Oklahoma officials have announced precautions ahead of President Donald Trump’s rally on Saturday, his first since the pandemic began and one that has been criticized by some for a multitude of reasons. A curfew began in a section of Tulsa on Thursday at 10 p.m. local time and is in effect until Saturday at 6 a.m., as worries grow over violent protests, according to Tulsa police. After the rally, another curfew will be in place until 6 a.m. Sunday. The rally begins at 7 p.m. The affected area is inside the borders of West 6th Street, South Boulder Avenue, North Guthrie Street and West Archer Street. Police said those who had camped out in the area, waiting for the rally, were being removed.Tulsa’s 19,000-seat BOK Center, where the rally will be held, is in the center of those borders.There is concern among officials about whether people “from organized groups who have been involved in destructive and violent behavior in other states are planning to travel to the City of Tulsa for purposes of causing unrest in and around the rally.” Tulsa Mayor G. T. Bynum signed an executive order stating that the manufacturer, transfer or use of Molotov cocktails or any explosive device is prohibited in the city. Bynum wrote on Facebook on Friday that he is aware some people think the rally “is great” and others think it “is reckless.” “Tulsa will be the first city in the country to host a major event on Saturday. We do this as our positive COVID-19 cases are rising, but while our hospital capacity remains strong,” he wrote. “Some think it is great, some think it is reckless. Regardless of where each of us falls on that spectrum, we will go through it as a community. ” Tulsa police wrote in a statement, “This is an unprecedented event for the City of Tulsa and has hundreds of moving parts, we are asking for everyone’s help in making this a safe event for all citizens.” Anyone who refuses to leave the designated area during the curfew could face a fine or be arrested, police added. For the curfew, no one other than certain officials will be able to walk, run, loiter, stand or drive in the designated area, police said.Trump has pushed forward with the rally despite concerns about the coronavirus’ spread in the city. Vice President Mike Pence has applauded Oklahoma for its handling of the pandemic, saying the state “has really been in the forefront of our efforts to slow the spread, and in a very real sense, they’ve flattened the curve.” However, data released by state and local public health departments there paints a different picture. The daily number of coronavirus cases statewide have actually increased over the last week, while the number of tests conducted each day has declined slightly, according to the state’s health department. The number of daily cases in the Tulsa area has also trended upward over the past two weeks, while the rate of testing has remained about the same, according to Tulsa County’s health department. Beyond virus concerns, Trump also faced criticism for the original date of his rally, which fell on Friday, the day of the Juneteenth holiday.Juneteenth commemorates the end of slavery. For many black Americans, it is celebrated as an Independence Day.Trump changed the date “out of respect.” The Trump campaign said each attendee will receive a mask and hand sanitizer, and will have to undergo a temperature check before entering the BOK Center. BOK’s management company said they are requesting a health and safety plan from the Trump campaign to detail how social distancing will be addressed, according to ABC Tulsa affiliate KTUL-TV. The company also said the center has installed 400 hand sanitizing stations and plexiglass partitions at concession stands, according to the affiliate. However, the company said they are only encouraging the masks handed out by the Trump campaign, not requiring them. Copyright © 2020, ABC Audio. All rights reserved.

Washington state deputy shot and killed in the line of duty
Lack of diversity in higher learning can be a problem for diverse student bodies
Whoopi Goldberg joins film on Emmet Till’s mother; Marla Gibbs & Jackée Harry to reunite on ‘Day of Our Lives’ & more
Chrissy Teigen thanks fans for sending the “most amazing” condolences after loss of baby Jack
Stanford University reports seven breakthrough cases of COVID-19 among fully vaccinated students
Ohio man charged with hate crime related to alleged plot to commit mass shooting of women