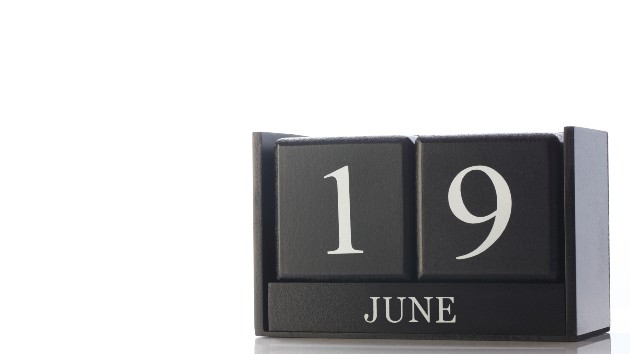 By JADE LAWSON, ABC News(NEW YORK) — As black people around the country prepare for Juneteenth, with a larger impact than normal this year as protests over racial injustice sweep the nation, thousands are fighting to implement change — including in the workplace.Change has come in recent days at large companies, like Nike and Twitter, who have announced the annual celebration of the end of slavery will be recognized as a company holiday. But employees are also taking up the fight locally — and winning.Kamira Morris, a black woman from Chicago, did just that at her job and one tweet later became a viral sensation. Morris is an assistant director of communications at Erikson Institute, an independent school and nonprofit organization.Given today’s social climate, Erikson Institute authorized an anonymous portal for employees to voice concerns over race. Many requested Juneteenth be a paid holiday.”Every company is under a microscope to be responsible right now,” Morris told ABC News. “Statements are no longer enough; we want to see actual change.”Morris’ job is to review those requests and present them to her boss. Morris’ boss offered a paid day off for just 2020, but Morris said a temporary holiday was not enough.”This is not a token time,” Morris said. “This is a time to demand action and we have to keep applying pressure.”She proposed the holiday be recognized in the company permanently. Within five days, Erikson announced all employees would have Juneteenth off in perpetuity.”I haven’t seen change this quickly, ever,” she said. “We have Fourth of July and though it’s great to have the day off, it doesn’t mean much to us because we were still slaves in 1776.”For black people in America, Juneteenth is recognized as a day of celebration in honor of the last enslaved black Americans in Texas being freed. Many black people take the day to reflect on their history since the first enslaved African was brought to America in 1619.Since tweeting the big news, thousands of people have reached out to Morris asking for advice and wondering how she found the confidence to speak up on behalf of her colleagues and the black community.Morris said without the voices of her colleagues proposing the holiday and her push for permanent change, it may not have been done otherwise.”If you’re afraid of doing it alone, write down some things that make you comfortable — form a task force of allies and other voices in the company and make change altogether,” she said. Copyright © 2020, ABC Audio. All rights reserved.

Seven injured in second mass shooting in Chicago in four days
Lin-Manuel Miranda apologizes for how ‘In the Heights’ “fell short” in representing Afro-Latinx community
Grandson arrested for allegedly murdering his own grandmother
Woman sets another woman on fire in alleged attempted murder: Police
DMVs, PennDOT centers closed June 18 for Juneteenth
Members of Congress hold moment of silence for Americans who died of COVID-19