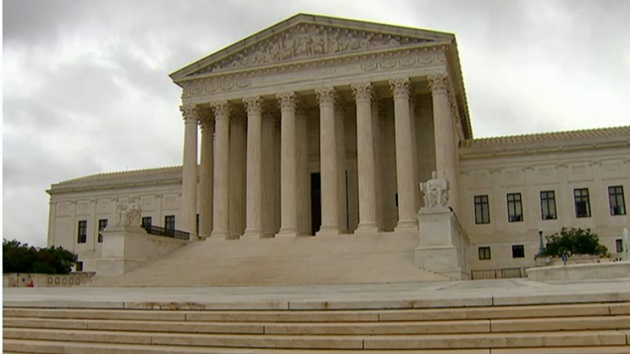 (WASHINGTON) — BY: JORDYN PHELPSAfter the Supreme Court dealt him a second blow this week, President Donald Trump sought to transform the losses into political fuel for his reelection bid.”Do you get the impression that the Supreme Court doesn’t like me?” the president tweeted, glossing over the fact that the rulings came from a conservative-leaning court, to which he has personally appointed two justices.

Do you get the impression that the Supreme Court doesn’t like me?

— Donald J. Trump (@realDonaldTrump) June 18, 2020 Blasting the rulings as “horrible & politically charged decisions,” the president said the outcomes prove “We need more Justices or we will lose our 2nd. Amendment & everything else.”“Vote Trump 2020!” Trump tweeted.In an appeal to his base, the president teased that he will do what he did in the 2016 campaign and again release a list of prospective justices he would appoint to the nation’s highest court if reelected to a second term.“I will only choose from this list, as in the past,” Trump pledged and said he would release the list by Sept. 1.In the 2016 campaign, the president used the list of prospective justices as a bid to appeal to those moderate conservative voters who might have been put off by his campaign rhetoric, or were otherwise reluctant to back him, by framing the election in terms of the balance on the court.The president’s tweets came after the Supreme Court on Thursday struck down his attempt to end an Obama-era program aimed at protecting children brought to the United States by their parents without documentation. The DACA ruling came on the heels of a landmark ruling on Monday in which the court ruled that employment discrimination on the basis of sexual orientation or gender identity is prohibited under federal civil rights law.Conservative Chief Justice John Roberts joined with the court’s four liberal-leaning justices in the 5-4 ruling, writing in the majority opinion that the administration failed to follow proper procedures in ending the program and did not consider how the decision would affect the so-called “Dreamers” who have come to rely on its protections, named after the DREAM Act that has failed to pass Congress.The president was notably more subdued in his reaction to Monday’s ruling, saying earlier this week that “we live with” what he said was a “very powerful decision.”But as the president also prepares to restart his in-person campaigning amid the ongoing pandemic with one of his signature rallies in Tulsa, Oklahoma, Saturday, the president is now seizing on the back-to-back defeats as proof that he needs four more years to push the Supreme Court’s ideological balance further to the right.

RG3 set to join ESPN’s college football coverage, according to report
Arkansas Gov. Asa Hutchinson seeks to reverse mask ban he signed, making him a GOP outlier
Jennifer Aniston reacts to twinning with Harry Styles
‘South Park’ creators ink reported $900 million deal for 14 Paramount+ movies; show to run through 2027
Unvaccinated patient in hospital pleads for others to get vaccine: ‘I want to help as many people as I can’
COVID leaves Louisiana front-line workers exhausted as hospitalizations surge