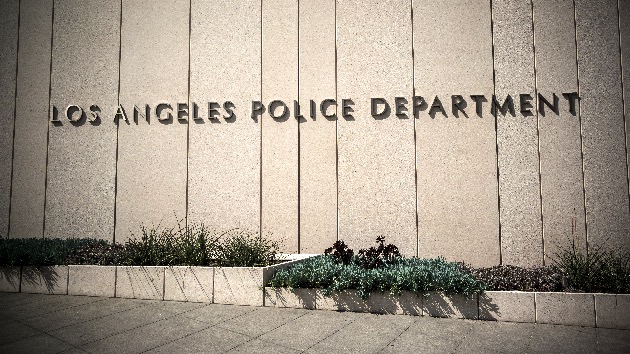 By CHRISTINA CARREGA, ABC News(LOS ANGELES) — A week after the Los Angeles Police Department launched investigations into 56 misconduct complaints that occurred during recent anti-police brutality protests, 10 officers were placed on desk duty, officials said.Police said that 56 complaints were reported as of June 10 and resulted in seven officers being assigned to “non-field duties.” As of Thursday, three more officers were pulled from the streets and placed on desk duty, an LAPD spokesperson confirmed to ABC News.The department said in a previous statement that they were investigating “allegations of misconduct, violations of department policy, and excessive force during the recent civil unrest.”Demonstrators in Los Angeles and across the country took part in anti-police brutality protests, which were mostly peaceful, yet some escalated into riots and clashes with officers.The ongoing rallies are in response to the death of George Floyd who was allegedly murdered at the hands of four Minneapolis police officers — after former officer Derek Chauvin pressed his knee into the back of Floyd’s neck.Of those complaints, 28 alleged use of force.Los Angeles County spent $58,440,262.23 in police misconduct lawsuits for the 2018-2019 fiscal year, according the county’s Chief Executive Office. That figure included $10.6 million in legal fees and other court costs.There are 40 investigators looking into every complaint thoroughly and will hold every officer accountable for their actions, police said in a previous statement.”It is a long process. We appreciate your patience,” said Officer Drake Madison, an LAPD spokesperson.Anyone who believes they were wrongfully accused of a crime, unjustly injured, or experienced misconduct at the hands of an officer can make a complaint with the department’s Internal Affairs Group hotline at 1-800-339-6868, police said.For complaints specifically related to the protests, individuals can email [email protected] or make a complaint through the Office of the Inspector General at 213-893-6400 or [email protected] Copyright © 2020, ABC Audio. All rights reserved.