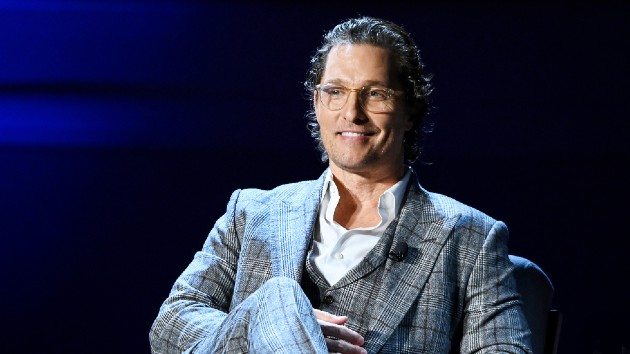 Photo by Noam Galai/Getty Images for HISTORY
Posted on June 18, 2020 by ABC News

(TEXAS) — Matthew McConaughey lost his father at the beginning of the eventual Oscar winner’s career, but the family patriarch is still very much with him.

“In 1992, I was five days into shooting Dazed and Confused and I got a phone call that my father had passed on,” the actor tells Town & Country. “I drove to Houston to be with my family. I was with them for five days, and they told me to get back to work. The first night back, I was walking around and it hit me that my father was no longer here, but I could still keep his spirit alive if I talked aloud to him.”

His father’s death inspired McConaughey’s personal mantra, “Just keep livin’,” which not coincidentally is also the name of the foundation he runs with wife Camila Alves.

“Twenty-eight years later, I’ve been unable to find anything that isn’t better if you take that mantra and slap it on it,” the actor says. “There are choices in life; there’s a way to make the ‘just keep livin” decision with every decision we make.”

While the Wolf of Wall Street star played a high school slacker in Dazed, his charity specifically benefits students from various backgrounds who are kept from taking the “wrong path.”

The father of three says of the students benefiting from their charity, “We end up getting really exceptional kids — some who were already doing okay but then really excelled, others who were on the wrong path and do complete turnarounds. They’ll become valedictorian, get a scholarship, graduate, and land a great job.”McConaughey noted proudly that every senior in the Just Keep Livin’ Foundation last year graduated from high school.

Jazz Jennings says ‘substantial’ weight gain due to binge-eating disorder
9-month-old baby drowns in bathtub in Father’s Day tragedy
US to ‘keep our eye on the ball’ in nuclear talks after Iran election: Sullivan
Father of 8 was set to get 2nd vaccine dose, but contracted COVID-19 and died
Judge sides with Florida in cruise lawsuit, says CDC overstepped authority
Billy Porter says the theater industry marginalized him for being Black and queer