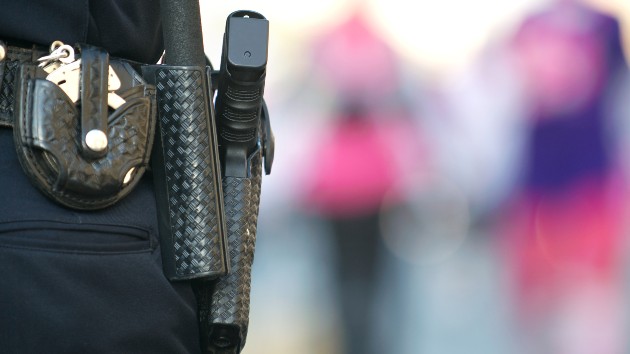 By MORGAN WINSOR, ABC News(LITTLE ROCK, Ark.) — The capital of Arkansas is banning its police force from using neck restraints following nationwide protests over the death of George Floyd in Minnesota.Little Rock Mayor Frank Scott announced the decision at a press conference Wednesday, saying he will sign an executive order barring police use and training of the technique. “The city of Little Rock has always been ahead of the curve,” Scott told reporters. “We have been listening to the protesters and community leaders to understand that we have to employ more police reform and accountability.”Little Rock Police Chief Keith Humphrey said the police department had banned chokeholds a while ago but had allowed a different type of neck restraint, known as “vascular neck restraint,” that will now no longer be taught. The officers already trained to use the maneuver will not be allowed to do so unless they can justify it was used to save a life. Disciplinary actions for those who do employ the technique will range from counseling to termination, depending on the circumstances, according to Humphrey.”We believe, at this time, in changing that as a technique that should only be used in the case of an imminent threat against someone’s life or an officers life,” Humphrey told reporters.Data compiled from the Little Rock Police Department’s annual use-of-force reports show that vascular neck restraints were used on 43 occasions from 2012 through 2018. Reports published prior to that period do not mention the maneuver, so it’s unclear whether the police force wasn’t using it or wasn’t tracking it, according to an analysis by Little Rock ABC affiliate KATV.Last week, the police chief announced that his department will implement a “duty to intervene” policy that requires officers to stop fellow officers from using excessive force. He has also asked the Arkansas State Police to review all officer-involved shootings in Little Rock. Earlier this month, the city’s board of directors approved the purchase of body-worn cameras for all on-duty police officers.Humphrey called the ban on neck restraints “a good move.””We saw with George Floyd’s death the horrible technique and the horrible actions of that officer,” he said. “Anything we can do to reduce the chance [of having to use deadly force], we need to do that.”The order comes on the heels of protests in Arkansas and across the nation over Floyd’s death in Minneapolis police custody. Floyd, a 46-year-old unarmed black man, died on May 25 shortly after a white police officer was filmed kneeling on his neck as three other officers stood by. The incident has renewed calls for police reform as well as an end to police brutality and racial injustice. Copyright © 2020, ABC Audio. All rights reserved.