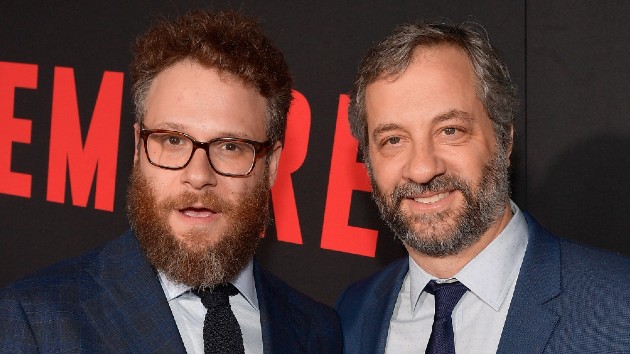 (LOS ANGELES) — We finally got some answers as to why Steve Carell invokes Kelly Clarkson’s name while getting a painful body wax in The 40-Year-Old Virgin. Turns out, it was all Seth Rogen’s fault.During director Judd Apatow’s appearance on The Kelly Clarkson Show Wednesday, the singer asked him how the famous “AHHH! Kelly Clarkson!” line came to be.Judd shows Kelly a photo of their ideas board from the film, featuring a list of potential profanities and “clean” phrases Carell’s character could say in that moment. Kelly’s name was on the clean list, and Judd reveals it was written in Seth’s handwriting.“I’m going to blame Seth Rogen,” he says.Kelly had a laugh over the list, saying, “I love that I made it between ‘burger panties’ and ‘throbbing monkey-tail.’”

She added, “It doesn’t matter what I do in my life, no one remembers me for anything other than that.”