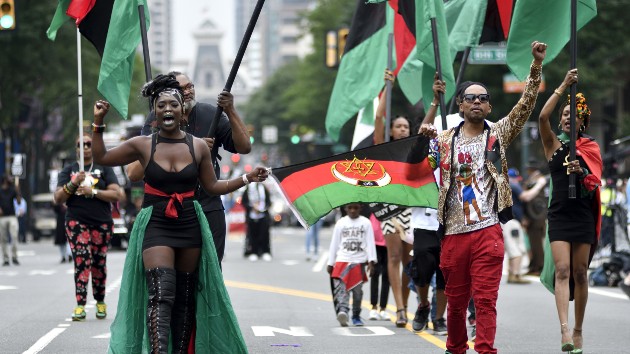 By CHRISTINA CARREGA, ABC News(NEW YORK) — Celebration, reflection and progression are what historians say some African Americans across the country anticipate each year with the commemoration of Juneteenth.American history lessons generally teach that when President Abraham Lincoln signed the Emancipation Proclamation in 1862, it ended the Civil War and slavery.But it took another 30 months and 19 days for the order to be carried out in Galveston, Texas — the last area in the U.S. where African Americans were still enslaved.Texas was one of the seven Confederate States of America, and even when Lincoln’s executive order was enacted on Jan. 1, 1863, “they weren’t going to recognize that anyway,” said Dwayne Jones, chief executive officer of the Galveston Historical Foundation.”In fact, there were slave owners who moved from parts of the South, from slave states, to continue the practice of slavery in Texas because they knew they could practice there for a longer time without interruption,” said Kelly E. Navies, a museum specialist and oral historian with the National Museum of African American History and Culture.

Jones said that when Gen. Gordon Granger arrived in Galveston on June 19, 1865, with a force of 2,000 Union troops dressed in red to enforce the Emancipation Proclamation, it was “very significant.”Granger read a synopsis of the Emancipation Proclamation and the last enslaved people in the U.S were free.In the beginning, the day was known as Emancipation Day, and the first celebration kicked off in January 1866, when about 1,000 African American families gathered in Galveston for a peaceful presentation at one of the city’s earliest African American chapels, said Jones.During the church-oriented event, a hog was roasted as songs filled the air in between readings of the proclamation.A combination of the month and date of Granger’s arrival in Galveston transformed the holiday into the name it’s been known as for over 100 years: Juneteenth.”The celebration of Juneteenth gives people a chance to pause and think about the history behind what we are going through right now,” said Navies. “It gives people the opportunity to ask themselves what are the root causes to the racial conflicts we are experiencing.”

Juneteenth 155 years laterObservances of Juneteenth have generally become more secular, but the tradition remains as celebrations have expanded to cities including Buffalo, Kansas City and Chicago.This year, due to the coronavirus pandemic, many traditional in-person Juneteenth gatherings have been scheduled to take place through livestreaming services like Facebook Live and Zoom.The police-involved death of George Floyd in Minneapolis on May 25 and the protests that followed have generated an increased interest in the history of Juneteenth.”We thought for the 150th anniversary five years ago, we would have gotten more attention, but it really took, unfortunately, other events in order to bring attention to it,” said Jones.Navies said the conflicts between African Americans and police can be traced back to the Reconstruction Era that occurred between 1865 to 1877.”Police stations and all of that were formed with the determination to control the newly freed African Americans, and that continues till this day,” said Navies. “Juneteenth resonates on so many different levels with Americans in this contemporary era.””We have to fight for more than just justice; there has to be the ability to prevent situations that allow us to be the sort of victims we have been,” said James Felton Keith, who is running to represent New York’s 13th Congressional District in the House of Representatives.In New York City, Keith has organized the “Juneteenth 1,000,000 March NYC,” where civil rights and grassroots organizations are expected to gather — with masks and gloves on — in front of City Hall, “where the most power exists,” Keith said. The group plans to march through Manhattan and paint a Black Lives Matter street mural outside City Hall, which is also across the street from the police department’s headquarters, said Keith.”Every march post-George Floyd is about justice, but this one is about policy change and that’s why we are marching starting at City Hall,” said Keith. “No power, no justice, no peace.”Navies said it makes sense that activism is associated with Juneteenth, “because here, you have people still struggling to achieve the civil rights they never fully gained.””This is what it is about: What does freedom mean and how do we achieve that freedom?” she said.

Juneteenth after 2020Keith said he grew up celebrating Juneteenth with his family by going to rallies in Gary, Indiana, and other cities, and he is disappointed and ashamed that it took this long for the day to get wide recognition.”Juneteenth is now on people’s radar even though we have been using it to validate our existence which has been wiped away from us for generations,” Keith said. “Juneteenth truly represents freedom.”Jones said he sees the increased interest as an opportunity to keep the momentum going and expand the history of Juneteenth into classrooms.”We teach American, local, state, regional history through a limited lens,” Jones said. “I’m sure the Emancipation Proclamation is discussed, but Juneteenth is not talked about. That’s something we feel needs to be changed … It does need more attention in the educational system and it does need recognition as a national holiday.”Texas, which made Juneteenth a state holiday in 1980, became the first of 47 states and Washington, D.C. to officially recognize or observe Juneteenth statewide. Hawaii, North Dakota, and South Dakota are the only states that still do not.On Wednesday, the governors of New York and Virginia announced that they will propose legislation to make Juneteenth a paid holiday for state employees starting in 2021.And companies including Nike and Twitter have become the first to make Juneteenth a paid company holiday.Copyright © 2020, ABC Audio. All rights reserved.