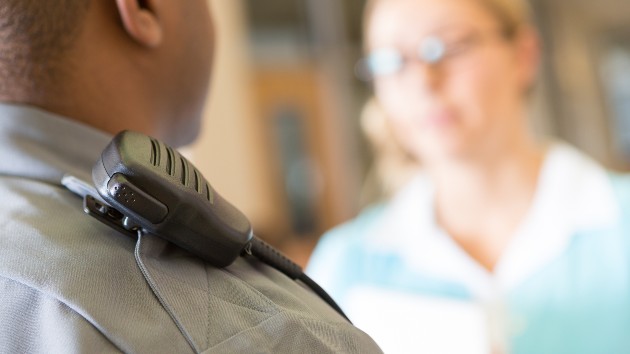 By ELLA TORRES, ABC News(NEW YORK) — As calls to defund police departments in the United States continue to spread in the wake of George Floyd’s death, an offshoot message has gained traction as well: remove officers from schools.Several districts around the country have either severed ties or considered severing ties with law enforcement amidst the protests, including Minneapolis, where Floyd died.Those in support of the idea say that police in schools have strengthened the school-to-prison pipeline — a concept that suggests when police are in schools, there is an increase of criminalization or severity in student discipline.Denise C. Gottfredson, a criminal justice and criminology professor at the University of Maryland, whose research has focused on the effects of school environments on youth behavior, told ABC News that police presence in schools became more prominent beginning in the 1990s.At that time, juvenile crime had increased.”The idea was to increase school safety. … The result has been an increase in the severity of responses to behavior in the past that would have been handled more informally by school administrators,” Gottfredson said.Yet crime among juveniles has steadily decreased from 2008 to 2018, the most recent data on juvenile arrests, according to the U.S. Department of Justice’s Office of Juvenile Justice and Delinquency Prevention.In 2008, the arrests of juveniles anywhere in the U.S. totaled nearly two million. As of 2018, there were an estimated 728,280 arrests.Nationally, school crime rates have also decreased since the early 1990s, according to the U.S. Department of Justice’s Office of Justice Programs.Police, though, still remain in schools. As of 2018, an analysis from the Urban Institute found that more than two-thirds of high school students had attended a school with a police officer present, and that schools with a substantial amount of black or Hispanic students have officers in schools at a higher rate than schools with few black and Hispanic students.The incidence of those attending schools with officers is highest with 25-50% black or Hispanic population, compared to less than 10% (53%), the Urban Institute said, citing U.S. Department of Education data from 2013-’14. And the rate of officers in schools is highest in the Southeast.Some disciplines — which in most cases disproportionately affect black, brown and disabled students — have increased, according to the most recent data.During the 2013 to 2014 school year, 44,370 public school students were involved in school-related arrests, according to the Civil Rights Data Collection.That number rose to 51,780 students during the 2015 to 2016 school year, the next available school year and most recent public data.Black students made up 36% of those arrests and white students made up 33%, despite black students making up a smaller percentage of the overall student population (15% and 49% respectively).There were also tremendous regional disparities in arrests. In 2015-’16, Texas, a state of 28 million, arrested 4,400 Hispanic and 2,008 black students, compared to 918 white students, according to the data. New York, a state of 19 million, by contrast, arrested 73 Hispanic students, 214 black students and 311 white students, the data showed.Gottfredson said it is not just arrests that exacerbate the school-to-prison pipeline. Suspensions and expulsions can be detrimental.”It’s known that when students leave school due to either drop out or suspensions and expulsions, they’re much more likely to be arrested and to get involved in the criminal justice system,” Gottfredson said.Students suspended or expelled for a discretionary violation are nearly three times more likely to be in contact with the juvenile justice system the following year, according to the American Civil Liberties Union.Gottfredson called expulsions and suspensions “one of the mechanisms through which police and ‘zero-tolerance policies’ push kids out of schools and into more a criminal lifestyle.””Minorities are more likely to receive those harsh responses and that results in long-term poor academic outcomes because as students lose time to expulsion and suspension, they get farther and farther behind,” she added.Though expulsions have decreased in recent years, during the 2015 to 2016 school year, 46% of black students had more than one out of school suspension compared to 26% of white students.Gottfredson said there are other ways to reduce crime in schools, including involving teachers and students in the process of defining rules, that don’t involve officers.Not everyone agrees.The National Association of School Resource Officers claims that for every dollar invested in a (school resource officer) SRO program in Peel, Canada, a minimum of $11.13 of social and economic value was created.Other benefits the association cited included preventing or minimizing property damage on schools, reducing the school’s need to call 911 and reducing the likelihood that a student will get a criminal record. The association trains officers to go into schools.Mo Canady, the executive director of the association, recently spoke to retired San Francisco Deputy Chief Jim Dudley for the podcast “Policing Matters” and said that school resource officers should not be done away with. Canady also said that he didn’t understand why now the conversation was coming up.”I haven’t been able to get a solid answer from anyone as to why, why now, and what’s beginning to come to light is it was just a convenient opportunity with what happened in Minneapolis a little over two weeks ago and it’s really sad,” Canady said.School districts have begun to sever ties with police since the death of George Floyd, who died in police custody. His death has sparked worldwide protests against police brutality and systemic racism.In Minneapolis, the school board unanimously voted to terminate its contract with the Minneapolis Police Department.The Seattle Public Schools Board said the district will temporarily cut ties with the Seattle Police Department for one year, according to ABC Seattle affiliate KOMO-TV.The superintendent of Portland Public School, Guadalupe Guerrero, announced that he was discontinuing the regular presence of school resource officers.

“We need to re-examine our relationship with PPB [Portland Police Bureau],” Guerrero wrote on Twitter.For those who have long questioned the presence of police in schools, it’s a step forward.”If you look at the research on police in schools, that research is very clear that adding police in schools doesn’t increase school safety,” Gottfredson said. “If anything, it makes things worse.”Copyright © 2020, ABC Audio. All rights reserved.