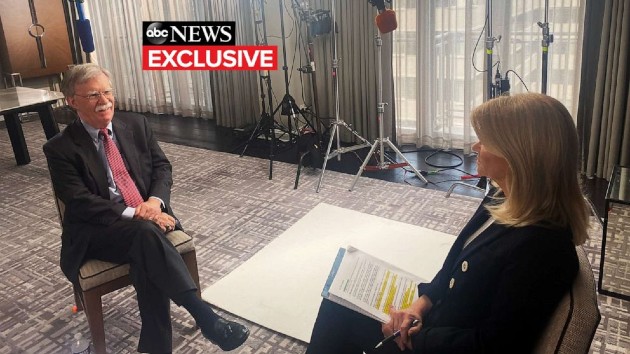 By CONOR FINNEGAN, ABC News(WASHINGTON) — President Donald Trump is not “fit for office” and doesn’t have “the competence to carry out the job,” his former national security adviser John Bolton told ABC News in an exclusive interview.In a new book about his 17 months at the White House, Bolton characterizes Trump as “stunningly uninformed,” ignorant of basic facts and easily manipulated by foreign adversaries. But his assessment that Trump is not “fit” to be president is among the most stunning indictments of a sitting president by one of their own top advisers in American history.”There really isn’t any guiding principle that I was able to discern other than what’s good for Donald Trump’s reelection,” Bolton told ABC News chief global affairs correspondent Martha Raddatz.”He was so focused on the reelection that longer-term considerations fell by the wayside,” he added.Bolton was Trump’s longest serving national security adviser, accompanying the president to his two summits with North Korea’s Kim Jong Un, his infamous meeting with Russia’s Vladimir Putin, and several key meetings with China’s Xi Jinping, Turkey’s Recep Tayyip Erdogan and other world leaders on the sidelines of major events, like the G-20.He departed the White House on Sept. 10 — saying he submitted his resignation letter after months of disagreement with the president, who countered that he fired Bolton first.Bolton argues that Trump was more focused on those photo ops than advancing America’s national security or foreign policy goals, writing in his book, The Room Where It Happened, that he’s “hard-pressed to identify any significant Trump decision during my tenure that wasn’t driven by re-election calculations.”Trump pushed back on Bolton’s criticism and defended his foreign policy decisions late Wednesday, telling the Wall Street Journal, “He is a liar,” and, “Everyone in the White House hated John.”A hard-liner on North Korea who has advocated for a preemptive strike on the country’s nuclear facilities, Bolton was particularly aghast at Trump’s diplomatic outreach to Kim, writing, “I was sick at heart over Trump’s zeal to meet with Kim Jong Un.”Asked about Trump’s three meetings with Kim in particular, Bolton told ABC News, “There was considerable emphasis on the photo opportunity and the press reaction to it and little or no focus on what such meetings did for the bargaining position of the United States.”Trump has continually touted his strong relationship with Kim despite any progress on dismantling North Korea’s nuclear weapons program and renewed military tensions between the North and America’s ally, South Korea.Bolton blasts what he sees as Trump’s confusion of personal relationships with good foreign relations in his book, which is out June 23 but an advanced copy of which was obtained by ABC News.”North Korea had what it wanted from the United States and Trump had what he wanted personally. This showed the asymmetry of Trump’s view of foreign affairs. He couldn’t tell the difference between his personal interests and the country’s interests,” wrote Bolton.That view has endangered U.S. national security, Bolton said.

‘Not a moment too soon’: Native American community welcomes Cleveland baseball team name change
From counterculture to competition, skateboarding makes its way to Olympics
New legislation would require women, like men, to sign up for potential draft
Maryland wildlife refuge fights to protect American history from climate change
Nathan Fillion gives new meaning to “arms control” as TDK in new clip from ‘The Suicide Squad’
Paralyzed man uses exoskeleton suit to get down on knee to propose to girlfriend